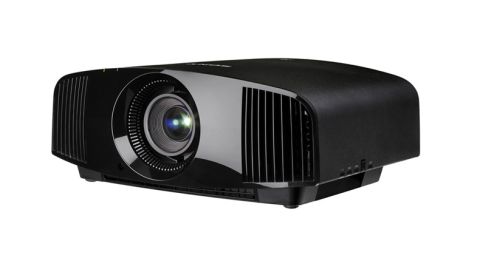 FauxK or 4K? Though it’s not a question you’d want to ask yourself out loud too many times, it is a consideration for anyone in the market for an Ultra HD projector.

True (or native) 4K projectors – those with 4K-resolution chips – are hard to come by at anything other than a premium price so, ultimately, the answer will largely be determined by your budget.

Native 4K projectors have previously started at around the £6000 mark, thanks to Sony’s now-discontinued VPL-VW300ES – though there's greater choice at double the price. However, more affordable 4K models tend to use alternative methods, such as pixel-shifting, to reach the resolution.

A range of ‘pseudo-4K’ projectors have helpfully filled the gap between the humble Full HD and pricier proper 4K models, including Optoma’s UHZ65, JVC’s ‘e-shift’ and Epson’s ‘4K-enhanced’ models, but Sony’s latest and most affordable projector aims to deliver true 4K at the same price as these models.

Like many Sony 4K projector before it, the VPL-VW260ES uses the brand’s proprietary 4K SXRD panels to achieve its true DCI 4K 4096 x 2160 resolution.

It goes a long way to explaining why the company has been a leading light in the 4K projector market – it's a position it seems determined to keep, going by the all-round standard of the VPL-VW260ES.

A quick run through its specifications suggests a strong bid for class-leading status. HDR support goes as far as HDR10 and HLG, and the second of the Sony’s two HDMI inputs allows 4K and HDR, thanks to its HDCP 2.2 certification.

There’s 3D support too, for those still cherishing their 3D Blu-ray collection (and glasses).

Sony claims a 6000-hour lifespan (on low-lamp mode) from the VPL-VW260ES’ lamp. That’s not a patch on the 20,000-plus hours promised by laser projectors, but then a shorter life is one drawback of lamp models.

The mighty, shelf-hogging 14kg stature and attractively speckled finish of the Sony’s shell is reminiscent of the brand’s more expensive models.

The finish doesn’t have to be spoiled by your grubby mitts during set-up either, as the powered focus, zoom and lens shift controls are easily adjustable via the remote.

Contrast, brightness and sharpness keys, as well as those for the Sony’s picture processing settings, are handy shortcuts during set-up too.

We delve into the menus to experiment with and tweak the Sony’s full range of settings, which include ‘MotionFlow’, ‘Reality Creation’ and ‘Contrast Enhancer’.

As we find black levels the poorest of the Sony’s immediately noticeable talents out of the box, the latter proves a worthy enhancement at low or medium level.

In our dark test room we also turn up the contrast levels to high and knock down brightness a little. Doing this achieves a competitive black depth that’s broadly on a par with the Optoma UHZ65, and contrast levels that pleasing too.

The VPL-VW260ES’s stark insight and faithful delivery of colours raises its calibre above the Optoma’s. So, what better movie to convey that than Thor: Ragnarok – one of Marvel’s most colourful films?

As the film opens with Thor being captured by fire demon Surtur, the Sony beams the brightness of the blaze to our projector screen while maintaining the detail in his rock formation.

The next two hours are a rainbow assault on the senses – there’s the eclecticly dressed aliens, extravagant light display on Sakaar, pink and green lasers from Thor and Loki’s guns, the shine off Hela’s emerald green cape and the glint off the gold in the murals... The Sony serves up a well-considered balance of richness and accuracy that has you confident you’re seeing the movie colourist’s true work.

With everything from skin-tones to hair to CGI brilliance, the palette manages to be easy on the eye without sacrificing punch.

The movie also assists with our testing of the Sony’s motion handling - which, while not completely free of judder during camera pans, is more than smooth and stable enough to enjoy.

The motion performance looks more natural without the MotionFlow setting activated, too.

As sharp as the movie’s class-A wit, the Sony is more accomplished than the Optoma: crisper, more refined and capable of carving out the finer details that makes all the difference in a film that relies on visual narrative as much as, say, The Revenant.

The Sony’s penchant for the nitty-gritty means it can unearth more textures and layers of depth in the sprawling, barren landscapes, and distinguish the minute discrepancies within the movie’s drab palette.

Who knows when – or even if – the prices of native 4K projectors will come down to more affordable levels? But for now, the £5200 Sony VPL-VW260ES represents the most affordable end of the spectrum, and makes a strong argument for true-not-faux 4K.

See all of Sony reviews