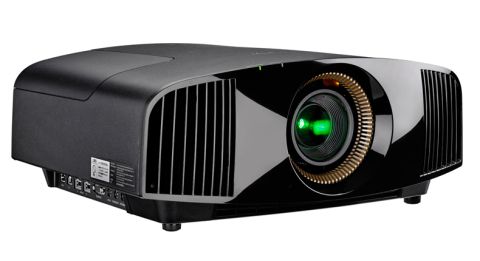 Hugely revealing and subtle, the Sony lives up to its high asking price

For the money you save over its bigger brother, you get a lower output (1500 lumens as opposed to 1700), no lens memory function, and the omission of a dynamic iris, meaning it doesn’t boast its big brother’s 200,000:1 contrast ratio.

It uses Sony’s household SXRD panels, which are said to produce a more stable image by minimising the space between pixels and aligning red, green and blue areas in every frame at a response rate of 2.5 milliseconds. Another Sony proprietary, Triluminos display technology, also promises to deliver better colour reproduction and detail than standard projectors.

Sony’s online store calls it a ‘compact 4K home projector’ on, but don’t take that literally. It leaves the same footprint as its big brother, the chassis about the size of a small microwave and weighing 14kg. It certainly looks the part: its black body has a grainy texture, like well-worn sandpaper.

If your set-up requires a projector to be near a rear wall, you’re in luck. With just the power lead plugging into the unit’s back, you’ll find operation buttons on the right side, and connections on the left, which include two HDMI 2.0 inputs (one supports HDCP 2.2, so is kitted out for future 4K hardware releases), and a USB socket for firmware updates.

An optional wireless HDMI receiver (£280) takes HDMI cables out of the equation between the projector and source.

The remote is reassuringly big with clearly labelled backlit buttons: shortcuts to bump up brightness, contrast and sharpness, adjust picture settings and switch picture modes. ‘User’ lets you fine-tune individual settings to your taste, though a THX Optimiser disc is the perfect aid here.

You’ll also need to square up picture to screen, but this painless procedure can be done in minutes with the remote’s ‘pattern’ key, which adjusts the motorised lens shift, focus and zoom.

But the VPL-VW300ES’s biggest selling point is its performance. We start with 4K, using material from a hard-drive supplied by Sony. Even the stock clips of cityscapes and flowers are enough to know the Sony is a great advert for 4K: razor-sharp and erupting with fine detail and eye-popping colour.

Up close to the screen, people and petals are astonishingly lifelike. It’s this sort of 4K performance that has us itching for Ultra HD Blu-ray players and discs.

Sony’s Reality Creation – a ‘super resolution upscaler’ – does a grand job of enhancing Full HD material. Play Birdman on Blu-ray and the VPL-VW300ES showboats its talent in the close-ups of Michael Keaton: his face bursts with expression and subtlety, and the Birdman costume is textured, the outline of each feather distinct.

One of Sony’s better processing modes, Motionflow smoothes out initial judder surprisingly well. However, the ‘Smooth Low’ level secures our vote for delivering a smooth yet natural look. ‘Smooth High’ goes one step further, but makes the movie appear too artificially processed.

Playing out in one single shot, the film is a series of camera pans, quick jerks, and swift movement through corridors. Yet the Sony doesn’t bat an eyelid, each transition steady and blur-free.

The assault of colour on Times Square billboards is bright, solid and well-judged, while the theatre’s rich curtains and seats are blood red – just right. Stage lights sparkle behind the darkened audience, each well-defined. Blacks aren’t as inky as through its rival the Epson EH-LS10000, but in The Hobbit: Battle of the Five Armies on DVD, the lapels of Alfrid’s black shaggy coat are more distinguishable.

Elsewhere, the Sony handles the mandatory resolution drop very well. The picture remains clean even in its densest moments. Beards (there’s a lot of them) are insightful and Tauriel’s fiery orange hair is radiant.

Active 3D completes the spec sheet, but you’ll have to fork out £48 for a pair of Sony’s glasses (TDG-BT500A) to take advantage of it.

Even though the VPL-VW300ES isn’t at the tail end of Sony’s line-up, shelling out £6000 for a projector is a serious business. But rest assured, you’ll see every penny of the asking price.

At this level, you won’t find many that pay more attention to detail. Or that can make movies look this good.