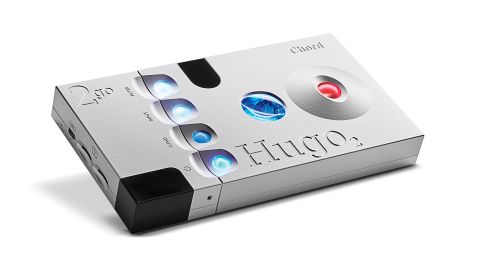 The Chord 2go is a brilliant way to add streaming capability to the company’s Award-winning Hugo 2 DAC. Together, they add up to being one of the most capable premium music streamers on the market, yet take up less space than a typical paperback.

This pairing is portable, and capable of running up to 12 hours on its internal batteries. It’s too large for most pockets, however, the combination is still small enough to fit into a bag or rucksack, though we would consider some sort of cover essential to avoid scratches or marks.

The 2go is more than just a DLNA streamer. Its two microSD card slots can handle up to 4TB of stored music files, which means this Chord can work as a server too. Any other device on the same network can play the songs stored on the Chord.

Add embedded Tidal and Qobuz capability alongside Internet radio, Bluetooth (4.1, A2DP) and Airplay, and you have a wonderfully versatile digital music source. It can act as a Roon endpoint too.

Physical connectivity is limited to an ethernet port – wi-fi works in the 2.4GHz band – and a pair of micro-USBs that plug directly into the partnering Hugo 2. One of these is for power and the other for the signal output.

Don’t worry if a network isn’t available, say if you’re out and about. The 2go can be set to wi-fi hotspot mode and your device can still feed it with a signal directly. Or, you could use Bluetooth and put up with a more compromised performance.

Battery life Up to 8 hours

The 2go won’t work with any converter other than a Hugo 2, unless you add the company’s 2yu interface (£449). The 2yu provides coax, optical and USB digital outputs that can work into any DAC – ideally, one that can take advantage of the 2go’s impressive file compatibility. It can play PCM music files up to 32-bit/768kHz and DSD up to DSD256. We can’t imagine many people having files outside the Chord’s abilities.

The 2go builds the software foundations laid for Chord’s first such streaming module, the Poly, and that means using the company’s recently updated Gofigure app for set-up and certain aspects of control. Unlike rivals such as Naim and Linn, Chord doesn’t have a dedicated UPnP streaming playback app, leaving the 2go user to find something from a third party.

An app such as mconnect works well enough, but lacks the polished user experience we expect of something dedicated to the product. The issue is one of resources, though, Chord is a small company and simply not in a position to deliver something better.

But it does build hardware really well. The 2go’s intricately machined aluminium case may be broadly the size of a pack of cards but it feels far classier than the traditional bent-metal chassis used by most alternatives. It would be nice to have a display to show what the product is doing rather than relying on the apps. This is particularly useful when the app or the unit stalls (as tends to happen with most streaming products). As it is, there’s no way of telling which is at fault.

Fortunately, Chord’s software engineering appears more robust than it used to be in the early days of the Poly, and the 2go isn’t massively behind the industry majors when it comes to stability and responsiveness. It’s not perfect yet though, as shown by the fact that our 2go and the Gofigure app combo crashed on initial install and takes multiple reboots to work properly. But over the extended test period, things work with a broadly similar level of stability as our reference Naim ND555 streamer.

We find single-ended interconnects with plugs slim enough to fit the gap around the Hugo 2’s outputs and plumb the 2go/Hugo 2 combo into our reference system. As we’re using a preamp, we fix the pairing’s output signal at line-level (set at 3V) – it’s done by a couple of button presses.

Equally, it’s easy enough to plug directly into a power amplifier or a pair of active speakers. Doing so would make for a clutter-free set-up and is worth doing considering the Hugo 2’s output section is more transparent than all but the most capable preamps.

Our reference system is made up of Gamut’s D3i/D200i pre/power with ProAc’s Response D2R speakers, though we also make use of Nagra’s legendary PL-P battery-operated preamp and Audiovector’s R1 Arreté speakers. The interconnects and speaker cables are a mix of top-end wires from Chord Company (the cable people) and Vertere Acoustics.

We know the Hugo 2 to be an excellent headphone amplifier, so use the Beyerdynamic T1s and Grado’s classic RS1 for some of the testing.

It’s fair to say that this Chord combination makes for one of the most capable music streamers we’ve heard. We’d be hard pushed to name an alternative that can dig up so much detail and present it in such a clean and precise way.

We stream Massive Attack’s Paradise Circus from Tidal and are captivated by the amount of information this streamer resolves. We’re more aware of the various instrumental textures than we would expect from anything at this level and love the focused way this combo renders the leading edge of notes. It’s hard to think of anything outside the mega-money range-toppers from the likes of Naim or Linn that can do these things as well.

The song’s complex rhythmic patterns are delivered in an assured manner, and every note is presented with purpose. The level of clarity here is stunning. It makes any of the price comparable opposition we’ve heard sound soft and blurred, and it’s all delivered with class-leading agility. This combo is an astonishingly responsive performer, one that reacts to changes in pace or intensity in an instant.

We switch to Beethoven’s Fifth Symphony, from a micro SD card, and are again pleased by the level of resolution on offer. We can track low-level instrumental strands no matter how demanding the music gets – the Chord pairing never sounds flustered even when pushed. Stereo imaging is as precise as you like and expansive enough to convince.

The story is similarly positive whether listening to Internet radio, AirPlay or Bluetooth. There are differences in quality between all these options, but the 2go/Hugo 2 combo is never less than entertaining.

One thing to note is that if you want to listen to any radio stations outside the BBC ones already installed in the Gofigure app, you will need to find the station’s URL and feed it in manually. It takes some time and a number of YouTube videos to find out how to do that, and the process should be much easier than it is.

There’s no denying the 2go/Hugo 2’s class-leading sonic talents, but its presentation errs on the clinical side, with a lean sound that lacks an element of natural warmth and richness. You can change the filter option on the Hugo 2 to add some of that, but it’s never truly convincing.

It doesn’t help that there is also a relative lack of muscularity to the presentation. This shows itself in a degree of restraint in expressing dynamic contrasts and an overall loss in authority when compared to rival streamers.

They, of course, don’t match the Chord in its many areas of strengths, so in the end, it comes down to choosing the sonic balance that works best for you and your system.

Normally, we only give five stars to fully rounded products. It makes them safe recommendations. This case is a little different. The 2go/Hugo 2 pairing isn’t as slick as rivals to use or set-up, and needs a good amount of care in partnering.

But, work around these things and you’ll have an astonishingly revealing and versatile music server/streamer that can deliver a level of clarity that it’s hard to match let alone better anywhere near this price. There’s no doubt that the 2go is a stunning achievement for such a small company.