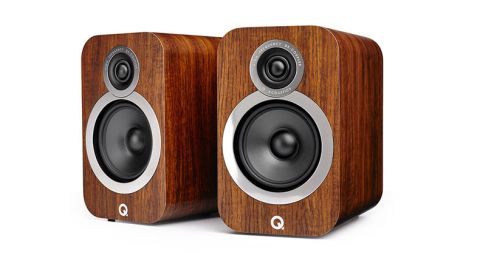 Consistency is an admirable trait in the manufacture of hi-fi kit. But when reviewing the second or third product in a range, it doesn’t make our jobs any easier.

Struggling for new ways to describe what is essentially the same character of performance, we’re occasionally tempted to simply link to the first review and add a few lines about any major differences.

That shortcut could be applied here, with the Q Acoustic 3020i standmounters. They're the next model up from the five-star 3010i in the company’s 3000i speaker range.

The two models are similar in both physical and sonic design, but the 3020i adds a little in size and scale, dynamic reach and detail to try and justify the extra £50 on the price. And while it is mildly tempting to stop there, we’re very willing to give the 3020is the review they deserve.

Which is, as you might have guessed, a favourable one. Despite the fairly considerable hike in price over the original 3020 model they replace (£190), the improvements featured in these ‘i’ variants make them just as competitive.

Most of these revisions centre around the cabinets, which are 25 per cent larger, by volume, than their predecessors.

Q Acoustics has worked to make them quieter, with point-to-point (P2P) cabinet bracing adding extra support to the parts of the box that need it most (i.e behind the driver).

The cabinet corners have also been internally braced, while the baffle has been reinforced to provide improved support for the tweeter and mid/bass driver.

A new crossover feeds the Q3020i’s 20mm soft dome tweeter and 12.5cm mid/bass driver (compared to the 3010i’s 10cm unit), and Q Acoustics has this time embedded the terminal sockets into the cabinet.

The terminals now also stick out straight and are deep enough to fully insert a banana plug. The upshot is a pair of speakers not only easier to plug cables into but, more crucially, are an absolute pleasure to listen to once you've done so.

We dust off our sample of the 3020s and listen to them alongside the new version. As we play Elvis Costello’s Pony St, the superiority of the latter immediately becomes clear.

While the 3020is largely ape their predecessors’ warm, rich and insightful character, joyfully skipping through songs with wind in their sails, the jangly piano intro comes through with more refinement, making the 3020’s treble seem rounded off in comparison.

The rhythmic structure between it and the bassline is more convincing, too. Q Acoustics’ tinkering has upped detail levels across the frequency range, and an improved spatial awareness also reinforces the successor’s greater sonic maturity.

We said their smaller siblings, the 3010i, could do with a bit more scale and dynamic reach to trouble the similarly priced, Award-winning Dali Spektor 2s. As you might expect from speakers with bigger cabinets and drive units, the 3020is are a better match.

The clusters of woodwinds that kick off Bon Iver’s ____45_____ fill our test room with ease, the soundstage a wide-open canvas for them to dynamically wax and wane under the Q Acoustics’ attentive watch.

That, and his noodling vocal, spotlight a midrange that’s lush, clean and clear, with enough transparency to get across the song’s densely engineered composition.

There’s fullness to the bass line in Kendrick Lamar’s Institutionalized – it thumps through thick and fast under the twinkling instrumental. The 3020is don’t need any help from a back wall to make gains in solidity.

In fact, unlike their smaller siblings, they achieve optimum tonal balance when granted a little liberty. It’s not the end of the world if they’re placed near a wall, though - they simply lose a little openness and agility.

We’d recommend placing them on stands – although be aware that the cabinets are just shy of 28cm deep, and feet at each corner can make positioning on stands any shallower than that a little tricky.

Q Acoustics may point you to a pair of its dedicated Q 3000FSi stands, for another £149 on top of the price - they're available in black or white (as are the speakers, in addition to walnut or graphite grey options).

The 3020i’s main competitors are the aforementioned Dalis, which are a touch clearer through the midrange, and more considerate in their rendition of Peter Broderick’s Moment. They grant more delicacy to his piano-playing, though the Qs counter with greater refinement.

However, the most noticeable tell-tale between the Q Acoustics and their rivals lies with timing, the Dalis combing through each of these test tracks with slightly more rhythmic precision.

Still, the Q Acoustics 3020is are no less enjoyable for that. A former Award-winning speaker that’s been improved, they keep Q Acoustics firmly among the cream of the budget speaker crop.

It’s two from two for the company’s latest speaker range.