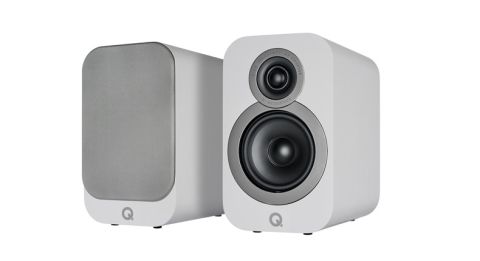 We now live in a world where the latest smartphones come with four-figure price tags and Cadbury Freddos no longer cost 10p. By comparison, £200 for a pair of hi-fi speakers seems to buy more quality than ever.

There has long been decent choice at this sort of price and, as the years have passed, the competition has become more intense as manufacturers manage to squeeze even better performance from their speakers.

Take the Q Acoustics 3010s, for example. This bookshelf speaker was a key part of the company’s five-star 3000 AV package.

But now there’s a new and improved version to replace it, the 3010i. It's the baby in Q Acoustics’ recently launched Q3000i range, and among the finest speakers you can buy for this money.

The extra ‘i’ appears to have brought extra sonic maturity with it, making its predecessor sound comparatively crude and less detailed by comparison.

The 3010is demonstrate greater clarity and refinement, and prise open the soundstage that bit wider so instruments can site themselves more securely on it.

We play Lord Huron’s When the Night is Over and discover the bass plucks are more textured. And there’s also a more obvious fullness we wouldn’t automatically expect from a speaker of these small proportions.

That rich substance extends right the way up the frequency range, past the fleshed-out midrange (more than transparent enough to get under Ben Schneider’s raspy tones) and into a treble that’s precise and has just the right amount of sparkle.

We are already well acquainted with Q Acoustics’ refined sonic signature, and it's manifest here too.

Musically, they hold everything together well – even the kaleidoscopic disco funk patterns that define Spoon’s latest album, Hot Thoughts. The track Can I Sit Next to You is an animated composition with fits and starts of dynamism, and the Q Acoustics start and stop each note with alacrity.

The track’s poised-yet-playful tone parallels the speakers' temperament. The delivery may not be as snappy or abandoned as rivals like the Dali Spektor 2s, our current Award-winners, but this measured-yet-fun approach is enough to inspire fervent foot-tapping.

However, their soundstage is more confined than those of physically larger speakers like the Dalis. The 3010is’ less spacious, smaller-scale presentation doesn’t work in their favour when fed a more congested recording such as The Psychdelic Furs’ Pretty In Pink via Tidal.

The track sounds a touch cluttered, and the 3010is don't quite match their rivals for scale or dynamic freedom either.

But to their credit, the 3010is still manage to deliver a cohesive and entertaining performance.

Such performance hasn’t come out of the blue, though. Q Acoustics has done some substantial tinkering, mostly to the cabinet.

The brand’s point-to-point (P2P) cabinet bracing aims to make the cabinets quieter by adding extra support to the parts of the box that require stiffening.

The corners of the cabinets have been internally braced, too, with the baffle further thickened to provide better support for the tweeter and mid/bass driver.

Q Acoustics has also replaced the traditional terminal panel cut-outs with embedded sockets within the cabinet. Unlike their predecessors, banana plugs can, satisfyingly, be pushed all the way into their sockets.

Like the Q3020i standmounters further up the range, the Q3010is have increased in size - the cabinets are 25 per cent larger by volume than their predecessors. There’s a revised crossover, too.

As with other models in the range, the Q3010is have a 20mm soft dome tweeter that's decoupled from the baffle via a suspension system to isolate it from vibrations from the 10cm mid/bass driver.

The speakers’ four rubber feet might make them difficult to fit properly on some stands – that’s where Q Acoustics’ new Q 3000FSi stands come in – although they will work well placed on a bookshelf, or even mounted on a wall. Here, Q Acoustics will no doubt point you to its Q 3000WB wall bracket.

Unlike Baby Houseman, these babies can be put in the corner. While it may be tempting to show off their slimline, curvaceous cabinets (available in grey, walnut, black or white finishes) and chrome driver surrounds in the middle of a room, the 3010is work best with some rear wall reinforcement.

We find this firms up their midrange and bass frequencies for the best tonal balance..

The 3010is may not be the most sonically versatile standmounters around at this price point, but they’re certainly among the most engaging.

And if the improvements made in the 3010is over the 3010s are mirrored across the rest of the range, including the (bigger) 3020i standmounters and 3050i floorstanders, Q Acoustics’ Q3000i range has a very good chance of rounding up more five-star reviews in the future.

See all our Q Acoustic reviews