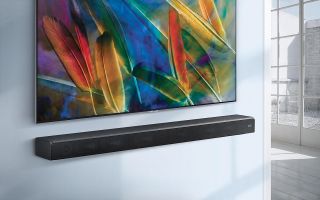 Home cinema enthusiasts seeking the thrills, spills and chills of surround sound once had no choice but to build their setup from separate speakers, amplifiers and cables. Today there’s a simpler solution: an all-in-one system.

With the Samsung HW-MS650, a single soundbar contains everything you need to get immersive, atmospheric audio for TV, movies, video games and music up and running in your home, while optional extras give you the opportunity to further enhance performance.

The system starts with the striking Samsung HW-MS650. This is a slim, wireless soundbar with clean lines and simple operation. There are just four buttons on the bar itself, with the rest of the controls being handled by the remote control or an app on your phone.

Inside the HW-MS650 are nine individual speakers, which work intelligently to deliver crystal clear dialogue and convincingly placed surround sound effects. The wide-range speaker array means that there’s no central “sweet spot". No matter where you sit in your living room, the audio quality remains high.

The soundbar connects directly to your TV and sources like Blu-ray players and games consoles, while wireless connectivity allows it to stream music cable-free from smartphones, tablets and laptops. For a truly cord-free experience, it also connects to Bluetooth or Wi-Fi-equipped TVs without cables.

While the HW-MS650 works as a fully self-contained system, it also forms the basis of a more extensive setup thanks to Samsung’s range of optional extras.

Looking for beefier bass? Add the powerful Samsung SWA-W700 subwoofer, which connects wirelessly to the soundbar and delivers the sort of sofa-shaking low-end punch that sends shivers down watchers’ spines. Thanks to Distortion Cancelling technology, that rumble never strays so far that detail becomes obscured.

For more accurate and immersive surround sound effects, there’s the Samsung SWA-9000S wireless rear speaker kit. Featuring two rear channel speakers and a module that connects to the HW-MS650 without cables, this add-on wraps you in your favourite movies, not in trailing wires.

Finally, there’s the Samsung WMN-300SB mount kit, a bracket that allows the HW-MS650 to be mounted directly to a TV. If the TV is a Samsung model, it also enables a stylish, tidy setup with a single power cable for both the TV and soundbar.

To find out more about Samsung Home Cinema Systems from the experts at Currys PC World, click here.