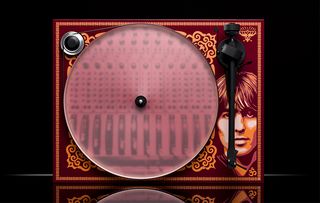 Not all records are created equal. Regardless of your particular taste in tunes, there’s no denying some LPs are produced, engineered and mastered to sound head and shoulders above your average chart-topper.

Marry exceptional sound with exceptional songs, and you get something like our selection of the best audiophile albums around, all of which will get your sound system singing.

That is, provided you have a suitably good source. Pro-Ject has helped us to choose four of its finest turntables to help to ensure you hear these records at their best, whether you want to spend a little or a lot.

Quincy Jones could fill a whole feature himself when it comes to expertly produced albums but we’ve plumped for the King of Pop’s timeless debut. Clean, punchy drums, intricate percussion and those trademark vocal gymnastics make a great test for any system.

Diana Krall - The Look of Love

Something a little smoother comes courtesy of Canadian jazz legend Diana Krall. Silky vocals are perfectly positioned in the mix for 50 minutes of aural pleasure.

Radiohead - Hail To The Thief

Radiohead have managed to avoid standing still sonically while retaining a signature sound, and with the help of Nigel Godrich, always deliver impressive and interesting recordings. Stuttering drums, off-kilter loops and Thom Yorke’s unique voice make Hail To The Thief one of their best-sounding records.

The great Stevie Wonder was something of a one-man band when it came to writing and playing his music, and this is arguably his finest work. As accessible as it is innovative, most importantly, it’s packed with wall-to-wall classics.

George Martin had to have his arm twisted to produce it, but once he did, it became an instant classic. A recent remaster ensures it sounds better than ever, from the delicate strings on Something to the sliding bass that underpins Come Together.

Influenced as heavily by '70s prog-rock as '80s disco, Daft Punk’s comeback album is undeniably a hi-fi record, with Giorgio Moroder and Nile Rodgers helping to deliver an immaculately clean and dynamic recording. And some great tunes, of course.

Back when MTV was all about the music, the channel released a string of superbly recorded acoustic sessions. Nirvana’s was a highlight, thanks to a mix of the band’s classics (Polly, On a Plain) and some brilliant covers (The Man Who Sold The World).

A rock opera concept album, which was beset by a turbulent recording process and required myriad artists and studios to complete… and yet still ended in one of the best-selling albums of all-time. Short, it ain’t, but test every aspect of your system, it most certainly will.