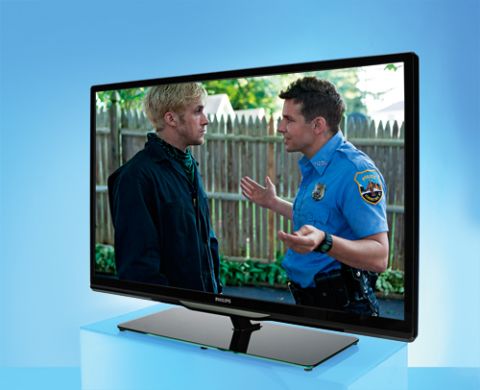 Superb picture quality across both HD and SD content, this friendly Philips TV is lovely to watch and use

It’s easy to see why we’re fond of this Philips 32PFL4258T, with its pin-sharp picture and its ease of use. This 32in LED-backlit LCD TV boasts a 1080p screen with Freeview HD tuner, wired and wireless connectivity, streaming features, and a host of smart apps including video on demand and internet radio services.

But it’s the Philips’s talent with picture that is the real talking point here.

Switch the Philips 32PFL4258T on and you’ll be met with a remarkably clean image that’s full of crisp and subtle detail, particularly with standard-definition or DVD content. Colours look vibrant and natural without feeling overblown. There is just a hint of coolness to the image, but it doesn’t sacrifice the overall balance of the picture.

It’s the depth of subtlety that impresses most here – from fleshing out objects with realistic shadow definition to conveying the texture of clothes, this TV is captivating to watch.

Play BBC’s Sherlock on Blu-ray, and the bright, punchy whites glow alongside inky deep blacks that don’t sacrifice detail. Whether it’s to convey the texture of Sherlock’s greatcoat or the cosy warmth of 221B, the 32PFL4258T delivers a natural picture that’s enjoyable to watch for hours on end.

HD content certainly looks good, but in fact it’s the Philips’s skill with standard-definition and DVDs that really impresses. Whether its Hansel and Gretel on DVD, or old episodes of Top Gear on Dave, this Philips 32in TV delivers an exceptionally clear and detailed picture.

A rival screen such as the Panasonic TX-L32E6B may win out in terms of outright insight when it comes to playing Blu-rays, but the Philips wins out with standard content.

It’s a shame there’s no means of fine-tuning the tint level on the 32PFL4258T – it offers only Natural, Cool or Warm options.

That hint of coolness is noticeable only when the TV is placed next to a more balanced screen like the Panasonic TX-L32E6B, but changing the tint to Warm skews the colour palette too much. It’s not a huge issue, though, and we’re content to watch it on Normal.

We’d turn the noise reduction level to ‘low’, just to smooth out the edges a bit more, otherwise we’d refrain from turning on the dynamic backlight and contrast ,or advanced sharpness levels, as the Philips’s picture is perfectly fine without any filters. As is often the case.

As always, we would recommend using a THX Optimizer disc to set the TV up first, though, to set the screen’s contrast and brightness levels correctly.

The Philips 32PFL4258T is by no means the worst sounding TV we’ve heard, but nor is it the best. The good news is that there’s none of the brightness that usually plagues slim TVs to the sound – the Philips sounds solid, with a rounded quality that’s perfectly pleasant to hear.

Voices are clear and direct, although the overall sound isn’t as open or cohesive as we’d like. It’s miles better than the Panasonic TX-L32E6B or LG 32LN575V, but the Samsung UE32F6400 offers a more satisfying and comfortable TV sound.

We really like the feel of this year’s Philips TV – the interface is smooth and intuitive, and it takes mere seconds to find your way around the menus. The design is elegant, and we particularly like the colourful programme guide – although we wish a picture-in-picture view was available when trawling through the list of channels.

Adding to the ease of use is the supplied remote control. It’s an intuitive handset with clearly marked buttons that are positioned exactly where your fingers would instinctively want them.

The smartphone control app – Philips MyRemote – is useful, too, if you prefer swiping across a touchscreen to control your TV. It’s a fairly basic app, but it’s neatly organised across the screen so you’re unlikely to accidentally touch controls in error.

There’s a bar at the bottom of the screen to change the volume – much like the volume bar in a smartphone’s music app – and it’s much more intuitive to use than pressing the big buttons found in some rival control apps. It’s not perfect, though.

You have to swipe across to access different panels featuring playback controls, smart options and a cursor pad to select options on screen. It can be a bit tiresome to keep flipping through the panels and it’s much quicker simply to use the remote control itself.

Hit the Smart TV button on the remote, and you’ll find a variety of apps available .

There is a software update impending, which promises to add the popular BBC iPlayer app, which will be crucial for a lot of people.

You can also stay connected to the outside world with social media apps such as Facebook and Twitter –a Twitter feed can be overlaid on the screen alongside the programme you’re watching.

Skype calls can also be made using the 32PFL4258T, although you will need to add an optional camera into one of the two USB ports available. There’s also scope for recording TV programmes on to a connected USB device.

If you have music, photos and videos stored on any DLNA-certified devices (such as a laptop or NAS box), you can stream them straight to this Philips TV over your home network. The 32PFL4258T supports WAV, FLAC and MP3 files, so you can seamlessy stream your digital music library to your TV.

You’ll need a stable internet connection for this, and the 3PFL4258T offers both wired and built-in wi-fi connectivity.

We really like this Philips TV – it’s one of the more enjoyable 32in TVs we’ve laid our eyes on this year. Its excellent picture quality is its biggest strength, particularly with non-HD content.

It does have fierce competition from rivals such as Samsung UE32F6400 (which offers better TV catch-up services) and the Panasonic TX-L32E6B (which has a subtler, more natural picture) – but the 32PFL4258T is such a friendly and talented TV, we’d happily have it in our homes.