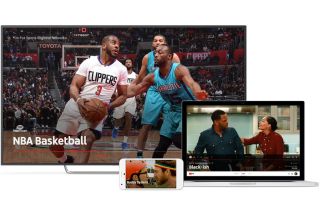 Forget internet TV, YouTube now wants to bring more TV to the internet, with the launch of YouTube TV - a live TV service that it claims makes TV more like YouTube. (Got all that?)

The Google-owned firm claims it offers "live TV for the YouTube generation - those who want to watch what they want, when they want, how they want, without commitments."

So what does that translate to? There are set to be 40 live streaming channels including news (ABC, CBS, Fox), sport (ESPN, Fox Sports Network), entertainment (FX, Disney Channel), and reality TV (E!, Bravo). The service has also partnered with local stations to deliver regional content in the US.

You can even add subscription TV services, Showtime or Fox Soccer Plus, for an extra charge.

Unlimited cloud DVR storage means you can store as many shows as you like and watch them wherever you are, as long as you can access the internet. Each recording is stored for nine months.

It works across a range of devices, and can be streamed to your TV using Google Chromecast. You also get access to all YouTube Red original content, though unlike YouTube Red - YouTube's paid-for, ad-free service - adverts will still appear.

Membership starts at $35 (£29) a month, and it's a rolling contract, so you can cancel anytime without committing for six or 12 months. That $35 fee lets up to six people access the service from multiple devices, so you can share your account with friends and family.

The service will launch in the US "soon" but there's no word on when - or if - it'll come to the UK. We'll keep you posted.