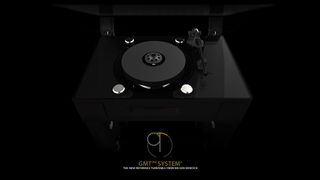 30 years after launching its debut product, the WB-One Turntable, and two decades after its Full Circle turntable follow-up, Wilson Benesch is introducing yet another innovative, built-from-the-ground-up turntable. The GMT ONE System marks the company’s 30th anniversary, and is a rather unusual - and, currently, mysterious - beast.

Rather than utilise the typical belt drive, idler wheel or direct drive designs, the GMT ONE System - named after the reference GMT time zone - is driven by a new, patented, magnetic-based system called 'Omega Drive'. Boldly, Wilson Benesch says it lays claim to being ‘the most accurate drive system ever developed for a turntable.’ Needless to say, we're keen to hear more...

The British brand has complemented the unique drive method with what it is calling the ‘Alpha Isolation System’, which has been designed in collaboration with an optical measurement system isolation company to constantly monitor and isolate the turntable from vibrations right down to 1.7Hz.

In addition to a new, dedicated cartridge, there will be three new tonearms available at the GMT ONE System’s launch. The reference Graviton (pictured above) is made from a single piece of carbon fibre tube, enhanced by a sandwich construction that aids rigidity. Joining it is a lower mass design, the Moment, and a low-to-medium mass design, the CTi-30.

The GMT ONE System also introduces the world’s first remotely adjustable VTA, with vertical tracking adjustable from the listening position to within 2.5 microns.

Pricing for Wilson Benesch’s GMT ONE System is yet to be confirmed, but availability is expected towards the end of the year. In the meantime, we should witness the first public display of a prototype at High End Munich 2019 this week.

Moon introduces 860A v2 power amp ahead of Munich debut