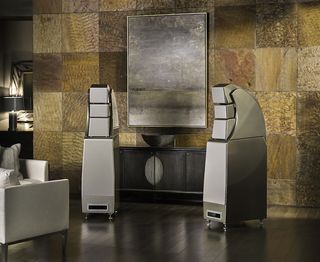 Alexx features Wilson's latest speaker technology, including a refined version of the company's MTM (midrange-tweeter-midrange) driver arrangement, whereby midrange drivers sit above and below a tweeter. They form part of a modular design, which allows you to adjust the way the sound focuses at the listening position.

This is done by altering the angle of the modules that hold the individual midrange and treble drive units. Alexx is the first time a Wilson driver array features two stair steps of adjustment, one for each of the two midrange modules.

Mids are handled by two different drivers, one 14.5cm and one 18cm unit - each one is assigned a different part of the mid-band to look after.

To handle the lowest frequencies, Alexx employs both 26.5cm and 32cm woofers, which work together in a low-resonance enclosure complete with angled baffle, which Wilson claims allows for better integration.

The new floorstander also features the latest version of the company's XLF (Cross-load Flow) port system. This allows you to move the port to either the front or back of the bass enclosure for added versatility i.e. to the front for bass-heavy rooms and towards the rear for bass-light environments.

The first orders of Alexx are set to ship during Q1 2016.