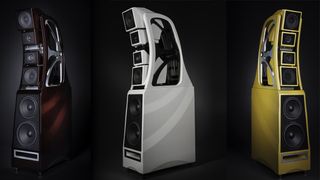 Wilson audio has released a set of high-end loudspeakers based on its successful Alexandria XLFs and which come in at a little less than the limited edition, £700,000 WAMM Master Chronosonics. The Wilson Audio Chronosonic XVX can be yours for £330,000.

Designed by Daryl Wilson - son of the late company co-founder, David Wilson - the Chronsonic XVX continues with the time domain obsession of the WAMMs, and includes a system where you can realign the positioning of the drivers and adapt these speakers to match the acoustics of your listening room.

Standing at an impressive 187cm (without spikes), these speakers have open upper architecture to minimize stored energy. Like the WAMMs, they're constructed from aerospace-grade aluminium, along with proprietary technologies which the Provo, Utah-based company refers to as S-, X- and W-material. Wilson Audio states that the overall effect is to reduce resonance by several orders of magnitude.

The 10.5in, hard paper pulp design woofer and the second, 12.5in woofer of the same material are those from the WAMM Master Chronosonic project. Likewise, there are two 1in doped silk dome tweeters (one forward-firing and one rear-firing) but it’s the midrange drivers which have been redesigned.

The all-new QuadraMag midrange drivers use Alnico magnets (aluminum, nIckel, cobalt) from older drivers for a warm and natural timbre, and a reimagined motor geometry. They were the last project that the late David Wilson worked on and there are three in the upper array of Chonosonic XVXs - two 7in versions and a 4-incher.

The Wilson Audio Chronosonic XVX is shipping to order now. The price Stateside is $330,000 (plus tax). You’ll be pleased to hear that your own custom colour choice is included and your speakers will be finished in Wilson Audio’s automotive-class paint facility. UK customers should head to Absolute Sounds for enquiries.

Should all that seem a little out of reach, then take a look at Wilson Audio’s entry-level TuneTot range which start at a much more palatable £11,500 per pair...