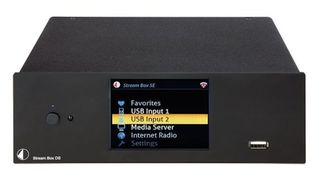 Pro-Ject has announced that all of its Stream Box models will now be compatible with Spotify Connect, thanks to a firmware update. The update means Spotify Premium subscribers will be able to user their mobile, tablet or computer to control playback from the Stream Box.

Music will also remain uninterrupted when making calls or if you go out of range - Spotify Connect streams your music from Spotify's cloud servers directly from the device, not via your phone.

The firmware update will also allow the Stream Box models to locate and stream lossless and compressed audio from DLNA-compatible media servers and PCs.

Users can update their Stream Box by going to Settings > General > Software Update.

See all our Pro-Ject news and reviews

It uses a 2.1-channel design, with 5.5in dual concentric drivers and 8in long throw subwoofer.

The Ruark R7 is available now in the new colour options for £2000.

See all our Ruark Audio news and reviews

European authorities have agreed to scrap mobile roaming charges from June 2017, meaning you’ll pay the same amount to use your mobile in Europe as you would in the UK.

However, the telecoms companies will be able to issue a “fair use policy” to prevent people abusing the use of roaming services.

They come with two types of ear tips: sport and regular, meaning they can double up as a regular pair of in-ears. They’re available from July in red, blue, green and black, for £50.

Linn will be offering customers 25 per cent off selected titles each day on the Linn Records store. Titles will be a mix of vinyl, new releases and new Studio Master downloads and the 25 percent discount will already be applied.

You can view and buy the available titles from the Linn Records store.

TVPlayer has added a pay TV option to its existing offering of 55 free-to-air TV channels.

The live streaming TV app, which is available on Android, iOS, Amazon Fire TV, Mac and PC, now has a TVPlayer Plus option for £4.99 per month. This gives you 25+ premium channels, including Discovery, History, British Eurosport and British Eurosport 2, National Geographic, Nat Geo Wild and more.

The app focuses on live TV but also offers around 100 hours of catch-up content anywhere you have a cellular or WiFi connection. You can use TVPlayer for free and existing users can register for a one-month trial of the new pay TV service, which is set to launch later this year.

Sony has created a neat video to show-off its MHC-V7D speaker, which uses Cymatics to show "the visual representation of sound".

The video uses water, sand, paint and even vodka to show how the drivers of the speaker move as the music plays. And it's a neat effect.

The end result is "geometric patterns formed by the vibrations of specific audio frequencies, water that precisely mimics the dynamic range of vocals, and ferrofluid that dances and evolves into spectacular formations due to electro magnets triggered by bass notes”. It's probably easier to watch the video above...