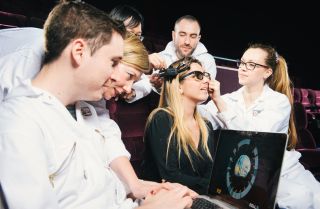 The research was carried out by a group of neuroscientists in conjunction - we should note - with RealD, who supply 3D systems and glasses to cinemas. So it's fair to say they have a vested interest.

Nevertheless, the research, which was conducted on over 100 people, claims watching 3D films can have a short-term "brain training" effect, sharpening the brain in a variety of ways for up to 20 minutes after viewing.

The research suggested a "7% shift in engagement" with 3D compared to 2D, too, which Professor Brendan Walker, of the aptly-named Thrill Laboratory, called "extremely noteworthy".

Patrick Fagan, neuroscientist and associate lecturer at Goldsmiths University, London, said: "It is a fact that people are living longer and there is a noticeable decline in cognitive brain function in old age which can impair future quality of life. There has never been a better time to look at ways to improve brain function.

"The initial results of this study indicate that 3D films may potentially play a role in slowing this decline." Repeat viewings of Avatar 3D for the elderly person in your life, then?

Of course, another way of looking at this is that your brain is simply working harder during a 3D film, which may or may not be what you're after from a visit to your local multiplex.

As Fagan himself said: "3D films are more immersive, heighten the senses and induce emotional arousal - this, in turn, makes the brain run at quicker speeds." So, it's more of a work out for your brain - and it keeps whirring for a while afterwards.

Still, it's another thing to consider when you weigh-up whether to watch the next blockbuster in 3D or not... Like Mad Max: Fury Road, for example.

MORE: 10 of the best Blu-rays to test your system