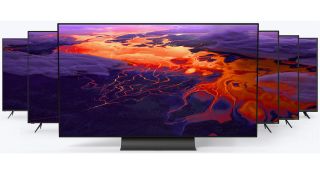 Vizio has confirmed pricing and availability for its first-ever 4K OLED TVs as it rolls out the rest of its 2021 4K TV line-up.

Following their unveiling at CES 2020 back in January, the 55in OLED55-H1 and 65in OLED65-H1 will cost $1300 and $2000 respectively when they arrive in the fall. Powering the OLED panels is Vizio's top-of-the-line IQ Ultra picture processor, which leverages a brand-new 3D color engine for superior color reproduction, as well as AI and machine-learning for improved resolution and detail.

Both OLEDs support Dolby Vision and HDR10+ formats and have HDMI 2.1 sockets that support eARC.

Vizio's promise to gamers comes courtesy of its ProGaming Engine, which it says "offers a level of graphics support rarely found in consumer televisions" thanks to low input lag and fast response times. Variable Refresh Rate (40Hz-120Hz) syncs a game's frame rate to the TV's refresh rate to reduce stuttering, while Auto Game Mode is also onboard for automatically reducing latency during gaemplay.

The brand's SmartCast TV platform is a gateway to the likes of Netflix, Hulu, Disney+, YouTube, CBS All Access, NBC and Prime Video, too - many of which have 4K HDR and Dolby Atmos libraries.

The latter is capable of an exceptional 3000 nits of brightness, controlled in just under 800 local dimming zones. It also boasts the same IQ Ultra picture processor found in the OLEDs, as do the 65in and 75in variants as well as the 65in and 75in P-Series Quantum models.

Pleasantly surprising, all V-Series TV include HDMI 2.1 certification with eARC and support the full suite of high dynamic range formats – HDR10, HLG, Dolby Vision and HDR10+. They're powered by the same IQ Active processor found in the M-Series Quantum models, and also offer plenty of apps via Vizio's SmartCast OS.