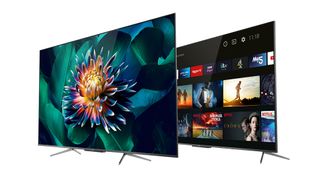 The X91, C81 and C71 QLED TV series are all coming to Europe , joining the X10 and expanding TCL's European presence to over 25 models across 12 ranges.

Both the C71 and C81 4K QLED series feature a QLED (Quantum Dot Light Emitting Diode) panel of course, which has been pitted as a rival technology to OLED TV.

In short, QLED panels are made up of quantum dots (tiny semiconductor particles only a few nanometers in size), which convert a backlight’s white light into coloured light, with the resulting colour being dependent on the size of the quantum dot itself - larger ones give off light at the red end of the spectrum, smaller ones at the blue end. They promise wider colour reproduction than traditional LCD TVs and a higher peak brightness than OLEDs.

Impressively, the C71 and C81 TVs all support the full suite of HDR formats: Dolby Vision, HDR10+, HDR and HLG. A Smart HDR mode aims to upconvert SDR content, too.

They also run on the Android TV 9.0 operating system (an Android 10.0 update is due later this year), with integrated Freeview Play offering direct access to a scroll-back live TV guide and catch-up apps. Disney Plus, Netflix and Amazon Prime Video are all correct and present at launch too, complete with 4K, HDR (including Dolby Vision and HDR10+) and Dolby Atmos playback of each service's compatible titles.

The main difference between the two ranges: the C81 sports front-firing Onkyo speakers with a rear subwoofer.