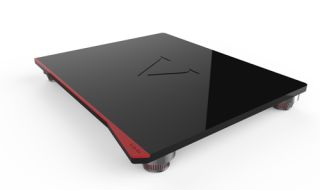 If you've found yourself distracted by unpleasant vibrations when listening to your music, a new British audio-manufacturer has launched a new product that may be of interest.

Vayta has introduced the dekk – the first in its new range of audio isolation platforms – and it'll be taking to the Kickstarter crowdfunding platform from the 14th to make it a reality.

It's arguably one of the less conventional products we've seen launched via Kickstarter this year – although there have been a number of innovative devices to follow that path.

The Vayta dekk is described as an "audiophile isolation platform" designed for use with an amplifier, CD player, turntable, streamer – or just about any piece of hi-fi equipment.

It has been constructed using a visco-elastic material called Sorbothane, which means that it is a solid that behaves like a liquid (at molecule level) when pressure is applied to it.

The platform itself is available in a number of colours and is made from Corian – a material that can often be found used instead of granite for thing such as kitchen worktops.

This happens when the feet unlock and disengage, automatically decoupling once weight is put on the platform – a feature that aims to eliminate sound vibrations.

UK design agency 3DI has worked with Vayta to develop the dekk, with the firm promising it to be "considerably less than its main market rivals" when it hits the shelves.

You can also purchase sets of the platform's four feet if you're someone who simply wishes to attach them – complete with the Sorbothane – to the bottom of a component.

If you want to learn more or want to get in with an early order, the Kickstarter campaign is to launch on July 14th and will be hoping to become 2014's latest crowdfunded success.