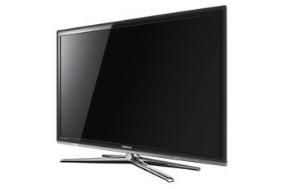 It will be available from John Lewis's flagship store on Oxford Street as well as Peter Jones and online at www.johnlewis.com. At the weekend, John Lewis Brent Cross, Bluewater, Kingston and Cribbs Causeway will also have the 3D TVs on display.

If customers buy the Samsung C7000 3D TV and BDC6900 they will receive the above glasses and disc bundle for free. This offer will run from the 22nd April to 30th June.

John Kempner, buyer for vision at John Lewis, is refreshingly aggressive: “3D TV is an incredibly exciting technology, and once again John Lewis is first to market.

Manufacturers like to use us as their launch partner because our customers are always early adopters of new technology.”

Well, that's us told. Will you be dashing over to John Lewis today? Or will you be adopting an arguably more sensible wait-and-see approach? Let us know.

You can read all about Samsung's 2010 range of home cinema products, including everything 3D, in the news stories below.

Watch our video review of the Samsung UE40C7000

Samsung today confirmed that its new range of Full HD 3D LCD/LED and plasma TVs will go on sale in Europe from March. The TVs will support new content and applications, including music jukebox service AudioLounge, video-on-demand provider BoxOffice 365 and Cartoon Network.

The company will offer 20 different 3D models, including LCD, LED and plasma screens. The biggest 3D TV will be a 65in plasma, and there will also be a 3D Blu-ray player and 3D home cinema system, as outlined in our original news story below.

"The success of recent 3D film titles is building anticipation from people who want to enjoy the richness of 3D content from the comfort of their living room," says Andy Griffiths, vice president of consumer electronics for Samsung UK.

All of the 3D TVs will include Internet@TV with access to Samsung's own apps. In the UK, these include LoveFilm, BBC iPlayer and Muzu.tv.

The chaps from Samsung have just delivered the first production samples of its UE40C7000 3D, LED edge-lit high-definition TV and BD-C6900 3D Blu-ray player for us to test, along with a copy of Monsters vs Aliens on 3D Blu-ray disc.

They're all set up in our test room, and we'll be publishing our verdict in the April issue of the magazine, on sale March 10th.

3D glasses cost extra
However, unlike rivals Sony and Panasonic, Samsung will not include any 3D specs with the TV as standard. It uses active shutter glasses, which will cost £100 a pair for the battery-powered ones, and £150 for the rechargeable version.

There'll be a special option pack, comprising two pairs of battery-powered active glasses and a copy of Dreamworks' Monsters vs Aliens on 3D Blu-ray disc, for £250.

Samsung says it may include the glasses as part of the package if customers buy the TV and Blu-ray player together. Expect retailers to offer a variety of 'bundle' packages.

All three ranges are 3D models with internet TV capability, with the exception of the 32in C8000 which is not 3D capable.

All models from the C5000 range upwards will also be equipped with Freeview HD tuners.

Internet TV, which will include apps for the BBC iPlayer, YouTube and Lovefilm, is standard on all models.

Last, and by no means least, come the Blu-ray home cinema systems. Top of the tree is the 7.1, 3D-capable HT-C6930W with built-in wi-fi and wireless rear speakers, due to sell for £799.

If you'd like to know more about Samsung's 2010 range, take a look at our CES blog. We'll bring you more news of UK prices and release dates on March 9th, when Samsung holds its official UK press conference.