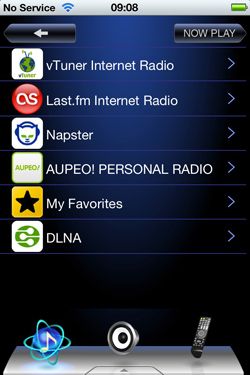 Also added is CEC control via HDMI of TVs and Blu-ray players.

In addition, the app can now be used to control Onkyo's new T-4070 AirPlay network tuner.

Onkyo has released an upgraded version of its remote app for the iPhone and iPod Touch, known as Onkyo Remote 2.

Available as a free download, the latest version can now be used to control the output in individual zones in a multiroom set-up.

Users can control their digital music libraries, as well as the majority of streamed music and internet radio services, directly from their iPhone/iPod Touch. In-app access to Spotify will be added in the near future, says Onkyo.

The Onkyo remote 2 app is compatible with all network-ready Onkyo home cinema receivers released in 2010 and 2011, as well as the T-4070 network tuner and TX-8050 network stereo receiver. Earlier models may require a firmware update.