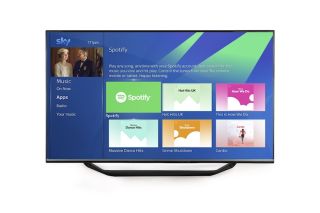 Spotify lands on Sky Q today, offering free access to the service and the ability to log in to premium accounts directly from the Sky Q homepage.

Also new today on Sky Q is a wide-screen user interface, which will allow you to scroll through content "within menu rails".

Sky Q customers can expect plenty more features later this year, including increased personalisation based on your viewing habits, extended voice functionality, the launch of HDR and a new kids mode - all due later this year.

Sky announced its plan to add Spotify to the Sky Q platform back in February, when it also promised to bring HDR video and more 4K content to the TV service.

While an increasing number of new TVs may have Spotify built-in, for anyone with an older model (and for sheer convenience), having the app directly on the Sky interface will make sense for plenty of people.

It's this same logic that saw Sky reach an agreement with Netflix to bring the TV streaming giant to Sky Q, though when Netflix will go live on Sky has yet to be confirmed.

Sky's Q3 results recently revealed there are now 2.5 million homes in the UK, Ireland and Italy with Sky Q, and a total of 13 million UK customers - that's up 70,000 in the last quarter.

Listen to the What Hi-Fi? Spotify playlist