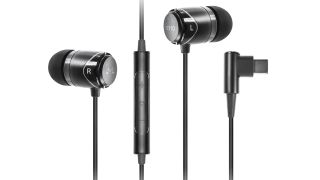 Headphone jacks on smartphones are disappearing quicker than you can say “dongle”, not only giving Bluetooth headphones their day but also digital USB-C and Lightning Connector headphones too.

There hasn’t quite been a tidal wave of the digital-ended type, but many brands have one or the other or both in their artillery - including SoundMagic.

The Chinese brand, which has won several Awards and five-star reviews for its budget E10 and E11 in-ear line, has now launched the £60 SoundMagic E11Ds: USB-C-ended versions of the standard (3.5mm-ended) E11Cs, designed to plug straight into the increasing amount of Android smartphones, and some Apple devices, with the popular connection.

While more niche than their siblings, the E11D in-ears look to follow the same success route. After all, the E11Cs gained five stars thanks to their entertaining sound.

There’s a fair chance they will; they retain the materials, design, three-button remote and drivers - just adding a dedicated DAC (which handles files up to 24-bit/96kHz) and USB-C connector.

Prefer to go wireless or very, very (‘true’) wireless? Then you may be pleased to hear that SoundMagic’s E11BT Bluetooth in-ears and the E11TW true wireless earbuds are just around the corner.