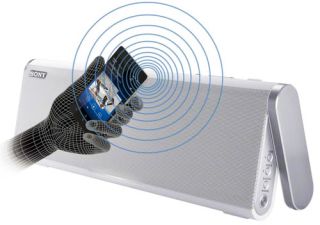 The SRS-BTX500 and SRS-BTX300 will work with NFC technology in smartphones and tablets from any manufacturer, requiring a simple touch of your device on to the speaker to pair them together. You can then play music using Bluetooth.

Both take advantage of Sony’s new Magnetic Fluid technology, originally developed by NASA, which is used to reduce distortion, improve clarity and boost efficiency so Sony says you’ll get more volume compared to other speakers with the same power.

Other features include a USB port for charging your device and a ‘hands free’ mode that will allow you to take calls through the speaker as and when they come in.

Both speakers are portable, thanks to a built-in rechargeable battery lasting six ('500) and eight ('300) hours respectively. A carry case is included, too.

This is another show of support for NFC from Sony, which has already showed off its NFC-enabled Bravia TVs at CES, not to mention sound bars, headphones and home theater systems also packing the technology.

The BTX500 will be available in a black and silver finish, while the BTX300 will be white and silver, and both will hit shops in April.