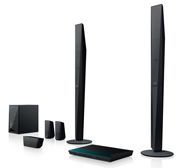 Sony has announced some more details of its 2013 line-up of Blu-ray systems, with features including 4K upscaling, music and video streaming from the Sony Entertainment Network, built-in Wi-Fi and playback from mobile devices using Blutooth and Near Field Communication.

The range-topping BDV-N7100W (above) has a striking white finish, designed to complement Sony's latest Bravia TVs: it's a 5.1-channel system claiming 1000W of total power output across its six channels, and with wireless connection of the rear speakers.

The speakers use what Sony describes as its new Magnetic Fluid Speaker technology, using a 'revolutionary ferrofuid material developed by NASA for the space programme', and giving a 'more accurate, revealing sound – even at high volume levels.'

Also new for the system is 'Football Mode': using acoustic data captured at a Brazilian football stadium, it allows the system to 'immerse you in the action – just like you’re there in the stands. Touch a button and cut the commentator’s voice when you want to focus on the action with no distractions.

'A winning result for any sports lover, Football Mode also enhances enjoyment of other sports like rugby, tennis or motorsport.'

Users of tablets and smartphones with Near Field Communication (NFC) can play music through the system just by touching their device to it, thus setting up an instant Bluetooth connection, and the system also supports streamed content from the Sony Entertainment Network, including video and TV shows from Video Unlimited and millions of songs and ad-free radio from Music Unlimited.

The system also supports Lovefilm and Netflix, as well as web-browsing, and social networking including Facebook and Twitter, and can be used with Sony's TV SideView app on Android or iOS devices, which enables the viewing of extra information about the Blu-ray disc or TV programme you're watching on smartphone or tablet.

Below the BDV-N1700W sit three smaller systems, without the wireless speakers. The BDV-E4100 (above) uses floorstanding speakers for the front left and right channels, and the BDV-E3100 (below) uses compact speakers all round. Each system has a total output of 1000W.

Meanwhile the entry-level BDV-E2100 uses a similar speaker system to the BDV-E3100, but has an 800W output.

Like the systems it supports Bluetooth and NFC, and it also has three HDMI inputs and one output.

Prices for the new Sony products are yet to be announced.