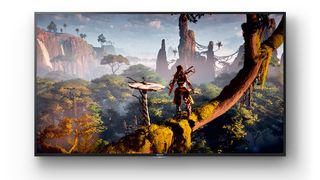 At the moment, only LG, Loewe and Panasonic sell OLED TVs in the UK, but they could soon be joined by Sony.

According to Korean business publication ETNews, Sony will enter the OLED market next month. And it will do so with a little help from one of its arch rivals.

The report says Sony's sets will use OLED panels from LG Display. LG Electronics (a separate company, but one still under the LG umbrella) is reportedly "disappointed" that the South Korean company would supply its Japanese rival.

Sony's OLED TVs will sell to the "higher premium market" according to the report. No surprise there - OLED is still a relatively new technology, so OLED TVs cost much more than less advanced rivals.

Forbes claims it has more details on the sets. According to Barry Young, CEO of the OLED Association, the sets will come in 55in and 65in versions, with panel shipments starting from the second quarter of 2017 (around April).

That would miss the CES 2017 show, however, which is where ETNews has predicted Sony will launch the new range.

Sony told What Hi-Fi?: "We don't comment on rumour or speculation."