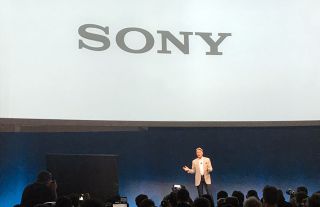 Sony’s CES 2017 press conference felt a bit like playing catch up. While it has led the way in areas such as hi-res audio, it has held back in others while its competitors steamed ahead.

Only time will tell if Sony’s more cautious approach has been worth it, but things certainly looks promising, with some gorgeous looking OLED sets, some long-awaited Dolby Atmos kit and a 4K Blu-ray player to boot.

We’ll be bringing you more on everything below over the next few days, but for now, here are the highlights from Sony’s CES 2017 announcements.

We’d already heard rumours that Sony would be joining the 4K OLED party this year, and its press conference confirmed it, with the announcement of the new Bravia A1 OLED range.

Available in 77in, 65in and 55in, it is powered by the same X1 Extreme 4K HDR chip used in 2016’s flagship ZD9 set, which promises to draw out the full potential of all that OLED has to offer.

It will also support Dolby Vision, Dolby’s HDR format - but there's no mention of HLG, the latest HDR format supported by both LG and Panasonic’s OLED sets.

Perhaps most interesting of all, though, is Sony’s new Acoustic Surface technology. Instead of having conventional speakers, the display itself vibrates, so sound is output directly from the TV screen. This, it is claimed, offers a more unified experience between picture and sound - it also allows the A1 to stay super slim and bezel free. We’ll be interested to hear (and see!) how it performs…

Sony also announced a five-strong 4K HDR LCD line-up, as well as four Full HD sets for those not wanting to make the pixel jump just yet.

The XE94 tops the 4K UHD range at 75in with a full-array backlight, while the XE93 in 65in and 55in offers Sony’s Slim Backlight+ technology with a quad-edge LED structure and super-slim design.

These two flagships sets will also feature the X1 Extreme chip found in the A1 OLED, and will also support Dolby Vision’s HDR format.

After teasing us with a 4K Blu-ray prototype back at IFA 2016, Sony has finally entered the 4K Blu-ray player market with the announcement of the UBP-X800.

It will also play back 24-bit hi-res audio, packs Bluetooth for private listening through wireless headphones, and promises upscaling of SD and HD content to “near 4K resolution”.

Despite the fact most of its competitors have been releasing Atmos-capable products for a couple of years, Sony has so far held off. Until now.

It used its press conference to announce its first Atmos soundbar, the HT-ST500, which promises a 7.1.2 channel experience from a single box.

Joining it is Sony’s first Atmos AV receiver, the STR-DN1080, which will be capable of a 7.1.2 setup and will also support DTS:X. We didn’t see its predecessor, the STR-DN1070, in the UK last year, so here’s hoping we get to see this one.

5) Sony’s 4K short-throw projector gets cheaper. But we still can't afford it.

It might be aimed at the professional market, and it might cost a hefty chunk of most people’s annual salary, but the Sony VPL-VZ1000ES short-throw projector sounds seriously impressive.

The projector's USP is that it can project a 100in 4K HDR image from just six inches away. It follows the LSPX-W1S 4K - but not HDR - short-throw projector that we saw at CES 2014, but is 40 per cent smaller and 25 per cent brighter.