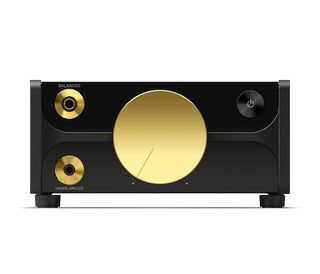 Remember the NW-WM1Z, Sony's €3300 gold-plated Walkman from 2016? Well, just when you thought portable music players couldn't get any more expensive, Sony has just revealed the DMP-Z1 will be making its way to the UK.

This ultra high-end digital music player will set you back a whopping £8000. Picked your jaw up from the floor? Good. Read on.

Interestingly, the DMP-Z1 can be powered via mains or the player's independent battery power system, which uses five separate battery cells to power both the player's digital and analogue blocks. A full charge should be enough for around ten hours of playback of non-high-res tunes (up to 128kbps) and around nine hours of high-res tracks (24bit/96kHz).

There's 256GB of built-in storage to fill, with the ability to expand this via dual micro SD card slots. USB Type-C connections and a Bluetooth receiver (including aptX HD) are also built in.

Sony's DSD Remastering Engine is included, which allows you to convert all PCM music sources to DSD 5.6MHz. The player even has a new Vinyl Processor feature, which Sony claims can recreate "the acoustic phenomenon unique to vinyl playback, such as the tone-arm resonance, tiny surface noise and the rich sound from the vibration by acoustic feedback from the speakers to the turntable". Interesting.

In a double whammy of high-end releases, Sony has also unveiled the IER-Z1R in-ear headphones. With a price tag of £2000 they're aimed squarely at serious audiophiles and, quite possibly, prospective owners of a DMP-Z1.

The Z1Rs use Sony's "HD hybrid driver system", which combines a 5mm dynamic driver, 12mm magnesium alloy domed dynamic driver and a Balanced Armature driver made from the same material.

Their outer housing is made from Zirconium alloy and includes faceplates that boast an eye-catching Perlage pattern.

Both the DMP-Z1 and IER-Z1R are due to go on sale in the Asia Pacific region in November. No specific word on when, exactly, they'll hit UK shops but at least we know we'd better start saving!