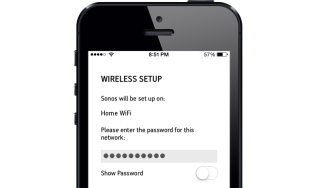 Sonos first revealed the plan to go fully wireless back in April and, following the biggest beta test Sonos has ever run involving thousands of Sonos users, the update is now official and available to the public. So, with a Play:1 now available for £169, that's the new entry price for a Sonos system.

Up until now, a Sonos multiroom system relied on one device being wired to your router. From that connection, your Sonos speakers formed a mesh network separate from your wireless network.

If you didn't fancy having your Sonos speaker within an ethernet cable length of your router, then the small Sonos Bridge could, as the name suggests, bridge that gap. But of course it added an extra cost and an extra box for your home.

The Sonos 5.1 software update means you can now create a Sonos system wirelessly using just one speaker, with the Play:1, Play:3, Play:5 and Playbar all able to be set-up with just a smartphone or tablet (for the Sonos app) and a WiFi network.

If you're running a Sonos 3.1 or 5.1 home cinema set-up then you will still need a wired connection - Sonos told What Hi-Fi? that this is largely to ensure lip-syncing works as it should. Also, should you be running a particularly large number of devices, live in a particularly big house or have a weaker than average WiFi network, you may still benefit from or require a Sonos Bridge.

And, in order to serve "the most challenging home WiFi environments", Sonos has also launched the Sonos Boost. A super-charged version of the Bridge - Sonos suggested the Boost is the Apple Airport Extreme to the Bridge's Airport Express - it's due out in the next few months and will cost £79. The Bridge remains on sale for £39.

Patrick Spence, chief commercial officer at Sonos, told What Hi-Fi? in a pre-launch briefing that the company has been spending time "making sure that this [wireless connectivity] was going to live up to the high standard we've set around rock solid wireless", and was only prepared to cut the wires from the system if the experience was as good as the wired solution.

"The vast majority of customers will be able to use wireless set-up. Sonos just got easier and more affordable. It's something we've aspired to do for a while and now we've got it up to our standards," said Spence.

Sonos is still using some of the technology that was in the original Sonos mesh network in order to ensure the speakers talk to each other, sync and so on, so it's not just using your wireless network.

Existing customers already using a Bridge can remove the Bridge if they like - though you'll have to start the set-up process again - but Sonos advises those people to keep the Bridge in place for the purpose of simplicity.

If you want to test how your existing system will work without the Bridge, Sonos has released some instructions:

2) With the Bridge still plugged in, select Bridge setup in your Settings

4) Once these steps have been followed you will be able to unplug the Bridge and test this simpler setup without the need to reset your system. You can then plug the Bridge back in at any time and switch back to ‘Standard Setup’ as you wish

What next for Sonos?

Does this mean Sonos will be pushing single speaker systems over multiroom? Spence says not. "When we brought the Play: 1 out the number of speakers that people start with rose.

"Our goal is to fill your home with music - that means more than one room. If customers want to start with one that's fantastic but most start with more than one and that's where you get the most benefit from Sonos."

At the start of the year we learned that 2014 was going to be about software not products for Sonos - and we've since seen a new Sonos app and the addition of Soundcloud on Sonos - so what is next for Sonos?

Spence continues: "After the Play:1, after the Playbar, we've certainly learned things in each of those categories around what we want to do next. And we believe there is a lot to be done... and we're just getting started. Watch this space."

The Sonos 5.1 software update is available now, the Sonos Boost is set to go on sale in the coming months.

See all our Sonos news and product reviews