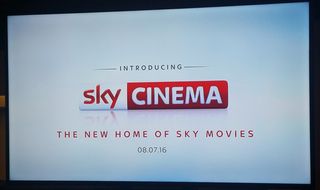 The additional cost for HD films is also set to be removed for new and existing Sky Cinema subscribers once the new-look Sky Cinema goes live. Sky also confirmed its first 4K films will launch on Sky Q before the end of 2016.

The rebrand brings Sky in the UK in line with Sky Germany and Sky Italy, which already use the Sky Cinema name, and the changes and new features will roll-out on Sky Cinema across Sky, BT, Virgin Media, Now TV and other platforms.

And while it may not be in Ultra HD, Sky says the new-look channels will deliver better picture and sound.

Stuart Brown, director, planning and strategy implementation at Sky, told What Hi-Fi? that Sky had reacquired the source material for many films and would use the AVC-Intra video format to deliver more detailed images.

Sky Cinema will deliver anywhere between a "10 per cent to 60 per cent" improvement in picture quality for some films. These picture enhancements will affect all Sky Cinema HD broadcasts but won't include IPTV services, i.e. Now TV.

The sound quality of Sky's on-demand movies will also be improved. FCC regulations require that commercials have the same average volume as the programs they accompany, which Sky does by applying audio processing to its movie channels. This processing will be removed for on-demand Sky Cinema films, which should, Sky says, improve their audio quality.

Sky Cinema will boast a bigger film library than the current Sky Movies offering, up around 20 per cent to 1200 on-demand movies, and will launch a new film on the service every single day of the week - up from four a week currently.

Spectre, Mission Impossible: Rogue Nation, Steve Jobs, Bridge of Spies and The Danish Girl will all go live over the next few months, while Sky's Christmas film line-up will include The Jungle Book, Zootopia and Captain America: Civil War.

Star Wars Episode VII: The Force Awakens will launch on Sky in August, alongside a Sky Cinema Star Wars 'pop-up channel'. Sky says it will be offering more and more of these curated channels, with themes set to include Disney Pixar, Harry Potter, Star Trek and Tom Hanks.

Sky also confirmed Ultra HD movies will be launching on Sky Q this year, and revealed the first slate of films to get the 4K treatment. These include The Martian, Everest, Spectre and Mission Impossible: Rogue Nation.

Sky stopped short of revealing a launch date for 4K content on Sky Q, though the smart money is on a launch in time for the new Premier League football season, which starts in August.

Last but not least, if you're a fan of Sky's Buy & Keep service, which sends out a DVD when you buy a digital copy of a film, Sky confirmed it would offer the option of Blu-ray discs some time in 2017.

Sky Cinema will launch in the UK on 8th July with a screening of Spectre.