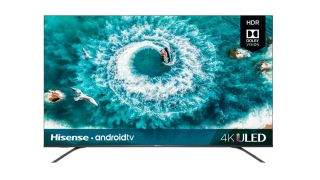 While there's no denying the shopping power of November's Black Friday shopping event, excellent 4K TV deals can be found all year round. And here we have proof of that.

Over at Best Buy, you can now save up to $100 on Hisense 4K HDR TVs that, quite simply, were pretty cheap already. We're throwing four big-screen models into the spotlight, which all have 4K resolutions, HDR support, and either built-in Android or Roku smart streaming platforms. And all are under $600...

In the UK? Well, you aren't short of fantastic 4K TV deals at your fingertips either!

Hisense 50R7E 50in 4K TV with Roku $280
For $280, this Roku TV gives you access to the likes of Netflix, YouTube and Hulu Plus, as well as over 4,000 other streaming channels. It certainly sounds like a great deal, and the 4.6/5 rating over at Best Buy does something to back that up.
Or, spend an extra $20 for 5 extra inches of screen.View Deal

Hisense 55H8F 55in 4K TV with Android $400
With premium ULED panel technology, Dolby Vision HDR support, and Android's smart platform with Google Assistant voice control, this is a step up over the above model in terms of specs and size. Again, another well-rated TV with a hugely attractive discount. The 50in version is also reduced, now $380.View Deal

Hisense 65H8F 65in 4K TV with Android $600
The same TV as above but with an extra 10 inches of screen real estate. You pay for the privilege, but $600 is still mega-affordable for a TV this size with its fair share of premium specs.

The best Walmart 4K TV deals ahead of Black Friday

Should you buy a Hisense TV?