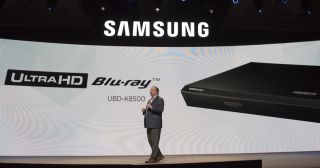 Ultra HD Blu-ray is slowly but surely becoming a reality and the launch of Samsung's 4K disc-spinner has increased our UHD options in the UK.

Commenting on the official launch, Robert King, vice president of consumer electronics for Samsung UK and Ireland said, "with the launch of our first UHD Blu-ray player, users can enjoy a wide range of movies and shows in outstanding quality, sharp resolution and brilliant colour, without wifi bandwidth restrictions."

Samsung gave us our first look at a 4K Blu-ray player when it unveiled the K8500 in September last year, even if that later proved to be little more than a shell.

The Panasonic player costs £600 and is widely available for pre-order now. It is also due to ship by the end of April.

MORE: 4K streaming vs 4K Blu-ray vs Blu-ray - which is best?