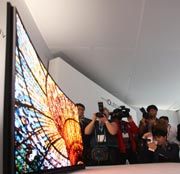 Samsung has just announced its results for the fourth quarter of 2012 and, as expected, the figures show substantial growth over the same period in 2011.

Profit, meanwhile, is up 9% on the previous quarter, itself a record for Samsung, and 90% ahead of the final quarter in 2011.

But while the company is targeting even more impressive figures this year, and expects further growth in sectors such as premium smartphones and 60in+ TVs, it's sounding a note of caution about the possible effect on profitability of the ongoing strengthening of the South Korean won on the world's currency market.

That means the Korean giant has one of the same problems as its Japanese rivals, which have been struggling for a long time as the yen strengthened against vital exchange currencies such as the US dollar and the euro – Samsung sources have told the Korean press that the strength of the won could cost it KRW3tn (around £1.75bn) of profits this year.

The company's Mobile Communications division, which makes its smartphones and tablets, was 4% up on the previous quarter in October-December 2012, with sales of KRW27.23tn (£16bn), mainly driven by the success of the Galaxy S III and Note II.

Those sales played a major part in the success of the IT & Mobile Communications division, which saw overall sales of KRW31.32tn (almost £18.5bn), which in turn accounted for over 60% of the company's total operating profit for the quarter.

The consumer electronics division, which encompasses TVs, saw revenue of KRW13.95tn (£8.2bn) in the last quarter of the year, up 20% on the previous three months, with OP of KRW740bn (£435m), up 87% on July-September, in contrast with the ongoing losses being experienced by the Japanese rivals.

Samsung says that reflects growing demand in both developed and emerging markets, with sales of its LED-lit TVs growing more than 50% on the previous quarter, and that it expects LED models to account for 80% of its TV business in 2013. It will continue to target developed markets with premium models, while also making specific designs for emerging markets.

It's also predicting growth in the large-screen (60in+) TV sector this year, and while it cautions that the first three months of this year will see a fall in demand from the peak of the last quarter of 2012, it says this is purely seasonal, and overall demand will still be up year-on-year.