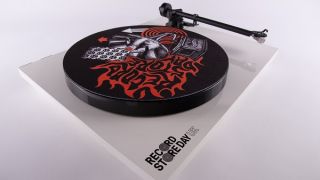 For years Rega has made a habit of releasing a limited edition turntable to commemorate Record Store Day in April - and guess what, this year is no different.

While last year's was a hybrid of the Planar 1 and Planar 3, Rega's 2019 effort is a custom designed Rega P1-Plus. The P1-Plus, which received five stars when it arrived on the scene last year, is the company's most plug-and-play deck yet, with a built-in phono stage (based on the Award-winning Fono Mini A2D), a moving magnet cartridge and a performance that's "hugely enjoyable".

Its phenolic black platter is marked with the words 'Record Store Day UK' – in the place of 'O's are record graphics, natch – and on top of it sits an exclusive RSD custom design mat. If it's anything like the special 2018 and 2017 models, a number of them could end up being signed by various music artists, too.

The custom Rega P1-Plus will be available from Saturday 13th April (Record Store Day itself) from independent record stores and Rega dealers.

We check over 130 million products every day for the best prices
What Hi-Fi? Newsletter