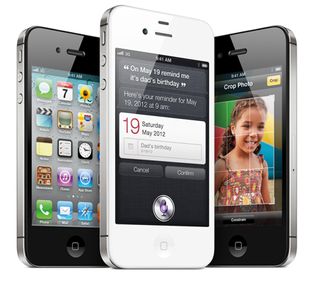 You can read all about the new iPhone 4S, iPod touch, nano and iOS 5/iCloud in our news story, but here's a picture gallery of the new Apple kit for you to drool over.

The new iPhone 4S looks the same as iPhone 4, but runs with the iPad's faster A5 chip and is said to have 7x faster graphics for video. It has better battery life, faster data, and faster downloads too.

Due out on October 14th, the 4S will offer a claimed eight hours of 3G talk time, six hours of web browsing, nine on wi-fi, 10 hours of video playback and 40 hours of music.

It also comes with an 8MP camera, 1080p HD video recording, redesigned lens and a new antenna system that will choose the best of two antennas depending on where you are. So that should solve that problem then!

There's also a smart new voice control system called Siri which will respond to voice questions with answers, so you can ask the phone what the weather will be like today, where the nearest restaurant is and even get voice directions for maps. Or get it to put a reminder in your calendar.

And the iPod Shuffle lives on!

The revised iPod touch includes high-definition video recording and Facetime, iOS5, iMessage, wi-fi syncing to iTunes and a total of 200 new features. It will work with all Apple's iCloud services, including iTunes.

While the latest iPod nano is available in a wide range of colours and with 16 new digital clock faces, including one with Mickey Mouse. It comes with larger icons for easier navigation.

iCloud will launch on October 12th in the UK. It offers 5GB of storage for free, while an additional 10GB is £14, 20GB £28 and 50GB £70. Users can access content from any iOS device and wirelessly back up their digital media across all devices.

iOS 5 will also launch on October 12th, features include Newsstand – for accessing magazines and books on a monthly basis in a dedicated app – a new look Camera app with a direct shortcut and more editing features, and notifications at the top of your screen, again for faster access.