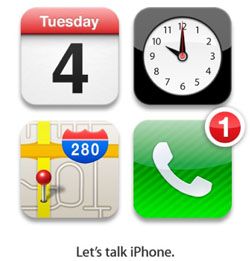 UK prices start from £499 for the 16GB iPhone 4S, with the 32GB model at £599 and 64GB version at £699.These are SIM-free prices without a contract. We'll get contract prices from the mobile phone companies as soon as we can.

19.30 Lots of explanatory information on the new iPhone 4S now. Siri, the voice Q&A feature, seems to be a big deal. Certainly sounds intriguing but will it work in a loud environment? And do people want voice control, anyway? Siri is exclusive to the iPhone 4S, so if you want it you'll have to buy the new handset.

19.20 Apple has launched a new voice control system. iPhone 4S will respond to voice questions with answers. Voice directions for maps, too. Are we still waiting for an iPhone 5? Who knows...

19.15 Apple AirPlay mirroring comes to the iPhone 4S. Similar to iPad allows you to throw video from iPhone 4S to your screen. Denon AV receiver appears on screen! Apple claiming this is the best iPhone yet, you'll be staggered to hear.

19.08 iPhone 4S has 8MP camera, 1080p HD video recording, redesigned lens and a new antenna system that will choose the best of two antennas depending on where you are. So, where's this iPhone 5?

18.58 The new iPhone 4S looks the same as iPhone 4. Runs with the iPad's faster A5 chip. Claims 7x faster graphics for video. So it's the inside that counts, then.

18.47 iCloud will launch on October 12th in the UK. 5GB media storage. Free. Access content from any device. Sounds good... Now we're moving on to iPods.

18.45 Apple launches Find My Friends app, allowing you to share your location and find others' location via iOS or your computer.

18.40 Now iCloud. Again, Tim Cook, Apple CEO, is going over old ground about the service, read all about iCloud in our original news story.

18.35 New iOS 5 features include Newsstand – for accessing magazines and books on a monthly basis in a dedicated app – a new look Camera app with a direct shortcut and more editing features, and notifications at the top of your screen, again for faster access.

18.30 Apple is on to iOS 5 and re-capping all the key features. You can read about these in our original Apple iOS 5 news story.

18.25 The stat onslaught continues... iPad: three out of four tablets sold in the US is the iPad. 250 million iOS devices sold to date. 18 billion apps downloaded from the App Store.

18.20 Apple has 5% of mobile phone market with existing iPhones. Potential there, then... Mass market iPhone to come?

18.15 iPod is still a large and imporant market for Apple. Some scary stats: 45 million iPods sold from July 2010 to June 2011. Over 300 million iPods sold in total. iPod has 78% market share. 16 billions songs downloaded from iTunes Store.

18.10 Initial focus is on new retail stores that have opened in Shanghai and Hong Kong. Apple now has 357 stores in 11 countries.

18.05 Innovations in software and hardware are promised.

17.50 The strongest indication yet that we will see a stripped-down, affordable iPhone comes from Apple's Japanese store. A picture of the iPhone 4S appeared on the store webpage. Rumoured to go on sale for around $100, the iPhone 4S would mark Apple's first foray in to the affordable smartphone market.

We will be reporting live from tonight's Apple launch event. We're expecting to see the iPhone 5 and possibly the iPhone 4S, and no doubt plenty more besides – and this is the page to find out all the news as it's announced.

There are rumours of the demise of the iPod Classic and even iPod Shuffle, more concrete rumours about the launch of Apple's iCloud service and of course plenty of talk about the new iPhones and iOS 5.

We will be updating this page with all the most important information so keep your eyes peeled - and keep refreshing the page - for all the latest news.

The Apple launch is due to start at 6pm UK time...