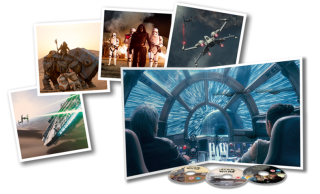 Disney is looking to make its movies more collectible by taking a design cue from vinyl. 'Disney Big Sleeve' is the result, which sees DVDs and Blu-rays coming in 12-inch sleeves, just like a record.

The 12in Big Sleeve cases are designed to be collectors' items that you'd show-off like a record sleeve rather than tuck away on the shelf.

Each release features both DVD and Blu-ray versions of the film, plus exclusive 12in art prints. You'll also get the typical extras such as deleted scenes and commentaries; all packaged inside an eye-catching, super-size sleeve.

MORE: 4K Blu-ray sales off to better start than Blu-ray

Disney has announced six titles to get the Big Sleeve treatment: Aladdin, Beauty & The Beast, Cinderella Live Action, Finding Dory, Guardians of the Galaxy and Star Wars: The Force Awakens.