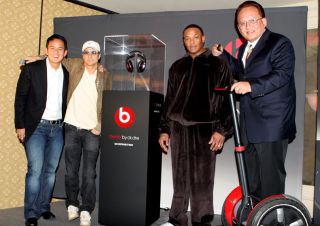 Lee, speaking to What Hi-Fi?, said his time working with Jimmy Iovine and Dr Dre was one of the proudest moments in his life - and that he sees the Apple Beats deal as the start of the next stage after the launch of the Beats by Dre headphones.

"Why would Apple pay $3 billion for Beats? To me, I think Apple got the steal of the century. My guess is they're changing the game once again," said Lee (pictured above, right).

"Apple has never made this sort of move before, buying a company like this. iTunes Radio has not been a success, iTunes is going down - people have more songs than they have memory - you need another solution. Streaming could be the answer.

While the lion's share of the coverage around Beats by Dre has focused on the company's headphones, Lee sees the launch of the Beats Music streaming service in the US as just as crucial a piece of the pie. And one that means the Apple ecosystem now covers a wider range of products and services.

"It's hard to monetize on the content side," said Lee. "No streaming music site has ever made money. “Beats wasn't making money... We were Beats, we knew what they were making. There's no way you can be making money and spending that amount on marketing. So they need the hardware. Apple has all the elements now."

While Apple and U2's partnership to giveaway the band's new album - revealed at the iPhone 6 launch event - was mainly centred around iTunes, and subsequent negative publicity, the album is also available on Beats Music as a streaming exclusive.

On top of Beats headphones and Beats Music, Lee also made it clear he believes Apple is buying 'cool'. "They [Apple] can incorporate the Beats cool factor in to an Apple uncool factor."

• Noel Lee was speaking to What Hi-Fi? following the launch of the Monster SoundStage multi-room audio system, which aims to take on systems such as Sonos alongside a whole host of new multi-room wireless products.