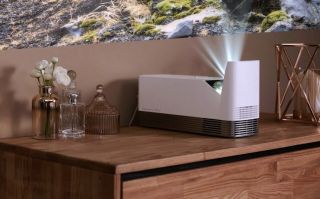 Ultra short-throw projectors have always been a practical option, making big displays possible for small spaces. But LG's latest model takes that practicality to an extreme, requiring just 12cm to produce a 100in display.

The LG ProBeam Full HD laser projector features both horizontal and vertical keystone for extra assistance in sizing up, and with 1500 lumens (1.5 times brighter than the brand’s previous ultra short throw-projector) and a 150,000:1 contrast ratio, should work well in bright conditions too.

With LG’s smart webOS platform onboard, users can access video streaming services, such as Netflix.

The ProBeam isn’t the only projector LG is unveiling at IFA, with the MiniBeam HD also due to make an appearance. The MiniBeam is a cord-free projector that, thanks to Multi-Angle Projection, can be tilted up to 70 degrees to display an image on a wall or ceiling without the use of a tripod.

With a claimed battery life of four hours, it's ideal if you've ever fancied watching The Lord of the Rings: The Two Towers on the go. The MiniBeam can be charged through a USB Type-C connection, which is also used to mirror laptops and smartphones. The MiniBeam can also connect to devices via Bluetooth.

Both projectors will be showcased at IFA 2017, so we’ll be beaming some prices and first impressions your way as soon as we have them.