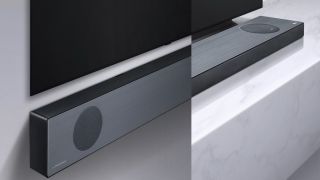 Details are a little thin on the ground, but LG has confirmed it will be officially unveiling three new soundbars at CES 2019.

Like 2018's SK10Y, the new SL10YG, SL9YG and SL8YG have all been designed and engineered with the help of the experts and British company Meridian Audio. They all support Dolby Atmos and DTS:X surround sound formats and have Google Assistant built-in for extra soundbar smarts.

There's also 'Image Elevation' which is designed to lift the soundstage and enhance the listener's feeling of immersion.

At only 57mm deep, LG is quick to point out the SL9YG can sit horizontally or fit flush to a wall. A built-in gyroscope works out you've positioned it and can alter its audio output accordingly.

If you want the full surround sound experience you can also team the new soundbars up with LG's optional wireless Rear Speaker Kit (SPK8).

Pricing and availability of LG's new soundbars are still to be confirmed, but we hope to be able to bring you more information when CES officially kicks off on 8th January.

Dolby Atmos: What is it? How can you get it? What speakers do you need?