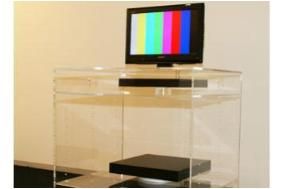 The prototype system is able to transfer up to 60W of electrical energy over a distance of 50cm, with 80% efficiency, or 60% including the high speed rectifier used.

And the company says this can be extended to 80cm with the use of passive extender units, without any loss of efficiency.

The Sony system uses "a form of contactless electrical energy transmission technology based on magnetic resonance.

'Electromagnetic energy is only transferred to recipient devices that share the identical resonant frequencies as the energy source, so energy transfer efficiency is maintained, even when misalignment occurs.

"Furthermore, even if there are metal objects located between the transmitter and receiver, no heat induction occurs."

We'll be reporting from the CEATEC Japan 2009 show next week – look out for our reports, starting on Tuesday.