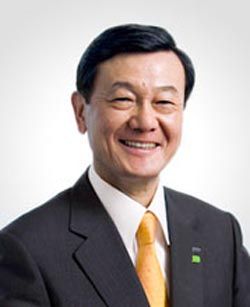 The Japanese TV industry is heading for something of a culture-shock. Not only are domestic sales tumbling – last month's sales were down 38% year-on-year, and revenues down 58% – but imported brands are beginning to make headway in a market where once only 'Made in Japan' would do.

Interviews with senior figures at the country's big consumer electronics companies now almost invariably end with one question: 'Are you planning to quit the TV business?'.

And however much the top men reassure reporters that 'We have no plans to do so', the questions will keep on coming until another of the big names 'does a Pioneer', and pulls the plug on its loss-making TV division.

Indeed, most of the big Japanese consumer electronics companies seem to be fighting something of a rearguard action when it comes to TVs, and the LCD panels most modern sets use.

Panasonic boss Fumio Ohtsubo (left) may have told a recent interviewer his company would be staying in the TV game, but his answer suggests he may see its days as mass-market TV manufacturer as being limited.

No money in mass TV sales?

'We operated on the assumption that we would do fine if we increased output,' he told the Nikkei recently, 'But it is now clear that making a large number of TVs won't guarantee us a profit.

'We are now considering changing the nature of the business by focusing on products that can beat the competition rather than output volume, for example.

But we have no intention of quitting the TV business.'

Speaking about the integration of the company's three business units – Panasonic itself, Panasonic Electric Works and Sanyo –, Ohtsubo said 'Our goal is to become a company that can offer solutions combining the three firms' expertise and products, such as solar cells and storage batteries, with a focus on the environment.

'Rather than selling television sets, refrigerators and other products individually, we want to fill the entire home, building and town all with our products.'

Meanwhile Sharp, a pioneer of LCD TV technology and once a market-leader, is living with the consuquences of the mistiming of a recent huge investment in TV panel technology.

Its massive Sakai plant near Osaka (above), which came on-stream in 2009, was designed to eat away some of the competitive advantage held by overseas manufacturers, principally LG Display and Samsung, by delivering huge economies of scale.

That was the justification for the Y380bn (£3bn) investment it made in 2007 to fund the building of the plant, but since then the Japanese currency has strengthened almost 30% against the dollar, meaning that panels made outside Japan are now more competitive than ever.

This time five years ago, one US dollar bought you Y115; today, the yen is trading at around Y76/$ – and that makes Japanese exports very expensive.

Also, a couple of Sharp's biggest customers – Sony and Toshiba – are among those who've gone elsewhere for their TV panels.

There's also been enormous pressure on panel prices – and thus profitability – from companies such as Samsung, which uses the relatively weak Korean currency to sell panels at much lower prices.

The Korean company's LCD division has posted losses for the past two quarters, but those losses are more than offset by the profits made by its joint venture with American glass company Corning, which makes the substrates on which LCD panels are 'built'.

On average, TV-size panel prices are down almost a third year-on-year.

As a result of plummeting revenues and profitablity on larger LCD displays, Sharp president Mikio Katayama announced in June that most production lines at one of its factories would switch over to making smaller LCD panels, such as those used for smartphones and tablet devices, as these are more profitable than TV panels.

He also announced that the state-of-the-art Sakai facility would make the production of very large LCD panels – 60in+ – a much larger proportion of its business.

It can do this because Sakai is set up to handle huge 2.88x3.13m 10th-generation glass substrates, which are especially suited to large-screen manufacturing. At the time of its opening, Sharp breathlessly revealed that the factory, able to handle 6,000 of these sheets of glass every month, could produce 13m 40in LCD TV panels a year.

Now it seems the plan is to produce a much smaller number of larger screens, but the jury's out on what the worldwide demand will be for LCD screens of this size, and whether the professional digital signage industry can take up any slack created by lower-than-expected consumer demand.

Certainly in Japan the current demand seems to be for much smaller screens, and of course the strength of the yen will do Sharp no favours in the land of the massive screen – North America.

On the upside, Sharp is reported to be working on new technology for more efficient recycling of flastcreen TVs, as required by Japanese environmental laws. Jointly developed by Sharp and Osaka Prefecture University, the new method uses superheated water to strip organic substances and metals from glass, allowing the base material to be recycled.

A pilot programme is already running at Sakai, and Sharp hopes to make the process commercially viable over the next 18 months, in time for an expected rise in demand for flatscreen recycling around the middle of this decade, as early flat TVs reach the end of their expected life-cycle.

Meanwhile, in another part of town…

Efforts by other Japanese companies to make money from the LCD business by joining forces are having what can only be described as a rocky start.

Hitachi, Sony and Toshiba have been discussion merging their small-to-midsize LCD panel operations for some time, and while an announcement finally looks possible, 'discussions' are still ongoing over matters such as who will head the new company created, where the plants will be, and how personnel will be reduced.

It now looks like things may start to move, driven by the involvement of a Japanese public-private investment company, but while the new firm may be set up early next year, it looks like actual integration may not take place for a significant time after that.

All three partners have proposed deals with other companies – for example, Hitachi pulled out of the merger talks earlier this year in favour of joining forces with Taiwanese company Hon Hai, but those negotiations broke down.

And when Hitachi came back to the table with Sony and Toshiba, its proposal to buy a Panasonic large-panel LCD plant and turn it over to smaller displays irked Toshiba. Toshiba makes LCD panels for Apple, and had planned to build its own LCD plant for such panels.

Considerations like this still threaten to torpedo, or at least weaken, any potential link-up between the three.

However much Japan's Industry Ministry favours the idea of alliances of companies to form Team Japan, able to take on the Taiwanese and South Korean rivals, it looks like this particular triumvirate is not so much charging towards the future, but teetering on the edge of it, with commentators suggesting that the slightest slip could derail the whole process.

And that would be a pity: Japan's LCD industry once led the world, but now needs urgent remedial work if it's not to lose its grip on the coat-tails of its Asian rivals.