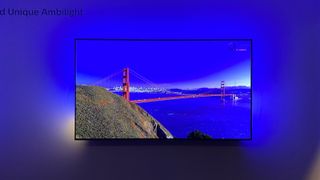 During the recent launch of Philips's TVs for the first half of 2020, we were treated to a brief look at some model non-specific features that are in development for future televisions. The most interesting of these was a new logo identifier designed to reduce the chances of burn-in on OLED panels.

While the regularity and seriousness of OLED burn-in is often overstated (usually by manufacturers who don't produce OLED sets), the fact is that OLEDs absolutely can suffer from burn-in, and that it's usually fixed, static images such as logos that are the cause. This new logo identifier is designed to almost entirely eradicate the issue.

Once enabled, it scans whatever's currently playing for any static images and carefully maps them using a series of little squares. Once identified, it applies a localised dimming effect that prevents the logo from causing an issue for the panel.

Truth be told, in action the precision of the scanning seemed a little at odds with the much larger area of screen that was subsequently dimmed, but that may have been more noticeable to us on account of Philips speeding up the process for the purposes of the demonstration. At home, the dimming will apparently be more gradual and perhaps therefore less noticeable.

Besides, even if the area dimmed is a little larger than the scan might suggest, its efficacy could still win it lots of fans. Philips's Danny Tack says he's been developing this for a long time (and has broken a lot of OLED TVs in the process) and that it solves 95 per cent of burn-in issues.

Unfortunately, the feature won't be coming to any current Philips models, or even the freshly announced OLED805/OLED855, as it apparently requires more advanced processing. We'd wager that it will make an appearance towards the end of 2020 or start of 2021, either on board an as yet unannounced flagship 4K OLED model or the company's first 8K OLED.

There's a Philips 8K OLED TV on the way