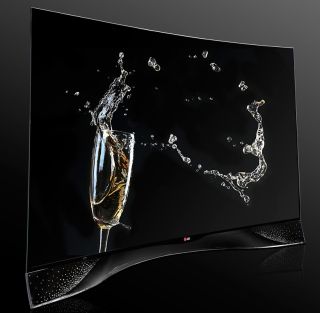 The Korean firm has had a couple of noticeable launches so far this summer, with its 105in curved 5K TV now on pre-order in its home country and the "world's first" curved 4K OLED TVs coming to this UK this autumn. But that's not all, it appears.

LG has teamed up with renowned Austrian jewellery brand, crystal manufacturer and coverer of gadgets, Swarovski, to create a "one-of-a-kind" curved OLED TV that features a streamlined stand that's studded with crystals for a viewing experience that's a little less ordinary.

LG says around 460 luminescent Aurora Borealis crystals, in three different sizes, have been applied by hand to the TV's stand.

This "ultimate premium OLED TV" will be on show at IFA 2014 in Hall 11.2 of Messe Berlin, before it goes on sale in Europe during Q4.

Hyun-hwoi Ha, president and CEO of LG's Home Entertainment Company, said: "The crystals help to create an aesthetic that is, quite simply, gorgeous, while our OLED technology ensures a level of picture quality that is every bit as stunning as one could imagine."

What Hi-Fi? will be on the ground at IFA 2014 and hoping to catch a glimpse of this "star-studded" TV, as well as the whole host of other new products and services coming to the market at this year's show.