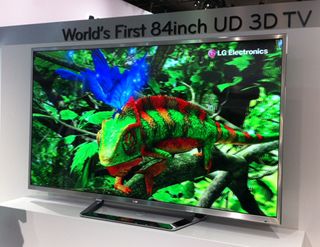 Samsung is not the only company here at IFA calling the shots in the TV tech war: LG too is gearing up for battle with a raft of technology highlights.

It too has what it decribes as "the world's largest and slimmest 55in OLED TV – Samsung might argue about that – and is also showing off its 84in Ultra Definition (UD) 3D TV, shown below.

We know Samsung already plans to bring the "most advanced commercial OLED TV" to market in the second half of this year for €9000 (£7200).

The LG 55EM960 is just 4mm thick and weighs 10kg. It uses both LG's 4-Color Pixels – adding white to the usual array of red, green and blue – and the company's Color Refiner, which is said to improve colour rendition when the set is viewed off-axis.

As if to emphasise the point, visitors to the LG stand at IFA are greeted by a dedicated OLED zone where they can experience the technology for themselves.

That's not all. You can also see the Korean firm's 84in UD 3D TV which delivers 8 million pixels and four times the resolution (3840 x 2160 pixels) of existing Full HD panels, thanks to LG's advanced Triple XD engine and the Resolution Upscaler Plus.