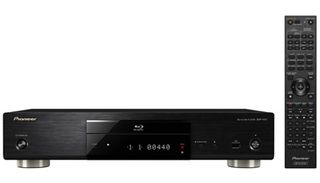 The additional models are both 'universal players', with support for 3D Blu-ray, SACD and DVD-Audio playback.

Twin HDMI outputs feature on the BDP-LX55 – handy for owners of existing AV receivers without 3D passthrough – while both models hook up to the internet via a wired ethernet connection. Pioneer's AS-WL300 wireless LAN converter is optional.

Naturally high-definition audio formats such as Dolby TrueHD and DTS-HD Master Audio are supported, and both models can be controlled using Pioneer's iControloAV2 app.

Key differences on the BDP-LX55 are an 'advanced anti-vibration construction', the use of selected acoustic capacitors and a high-grade power supply. Gold-plated HDMI terminals and a 32-bit/192kHz DAC complete the upgrade.