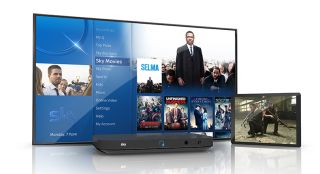 Sky Q is already one of the best home-entertainment packages around - and next year it's getting even better. That's because it will get a host of new features, Sky has announced, giving viewers more control and allowing them to record even more.

Sky will also let viewers personalise their homepage. The new homepage will let customers access their latest recordings with one swipe, and give them new show recommendations based on their viewing history.

MORE: Sky Q: Everything you need to know

Sports fans are also catered for, with the new Sports Start Over feature. If you tune in halfway through a match, this feature lets you jump back to the beginning, so you can see how they got to where they are. This will work for football, F1 and golf – just don't look on Twitter and have the result spoiled.

Finally, Voice Search will be enabled on the touch remote, letting you speak the name of a film or show to find it. Sky has been talking about this new feature since Sky Q launched at the start of the year, so we're itching to try it.

Sky recently cut the price of Sky Q to £20 a month, down from £42 at launch (that's for the Sky Q Original Bundle, which includes 270 channels, but not Sky Cinema or Sky Sports). It also phased out its Sky+ HD box, so all new Sky boxes are Sky Q (though it did recently update the Sky+ HD menu, so is still adding new features).