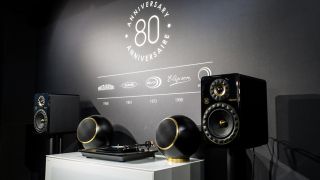 Not many audio companies have been around for 80 years, so we certainly don't begrudge Elipson making a song and dance about its 80th anniversary. France's oldest speaker brand, Elipson really made its name with its spherical speakers, which first hit the market in 1967 with the BS40 / 2 model.

Fittingly, the latest version of the Elipson spheres, the Planet L, are one of three products - three of the company's best-selling products - getting upgraded and rereleased for the company's 80th birthday.

Both the Planet L spherical speakers and the Prestige Facet 8B bookshelf speakers have been given new and improved crossovers, plus a fresh satin black and gold finish.

Also getting the birthday treatment is the Alpha 100 RIAA BT turntable, the wireless version of the Alpha 100 RIAA. Again, while there's the same black and gold cosmetic upgrade, there's also the promise of a new and improved phono stage.