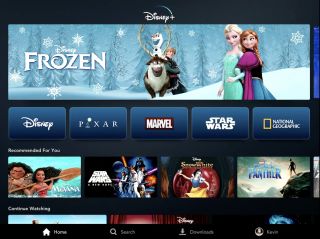 The slow drip of details surrounding the Disney Plus streaming service continues and it's mixed news for people in the UK.

Disney has confirmed more details for the global launch with five countries set to get access to the service within a week of the US launch. 12th November will see Disney Plus launch in the US, Canada and Netherlands, while a week later on the 19th it will go live in Australia and New Zealand.

So that means Disney's streaming service won't be in the UK at launch. Disney did confirm that it would launch "in most major markets within the first two years".

At launch, Disney Plus will work across Apple iPhone, iPad, iPod touch and Apple TV, Android phones, Android TVs, Google Chromecast and Chromecast built-in devices, Xbox One, all Android based Sony TVs, PlayStation4, Roku streaming players and Roku TVs. Just so long as you're in the right country...

Disney has launched a social media campaign around the service, focusing on the company's raft of content, including Disney, Pixar, Marvel, Star Wars, and National Geographic.

Someone asked us to formally introduce ourselves so of course we made a video. pic.twitter.com/VZLrJ6ff7kAugust 19, 2019

Disney's betting on its nearly-century-old back catalogue - plus its lucrative subsidiaries - to tempt viewers from Amazon Video and Netflix, while those services spend big on building their own libraries of original content.

Disney hasn't said much about picture and sound, so it remains to be seen whether 4K, HDR, Dolby Atmos and more, will be on the menu.

Disney Plus streaming service: everything you need to know