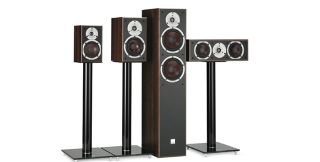 While it might sound like an evil organisation in a Bond film, Dali's new Spektor line of loudspeakers aims for a little less than world domination: namely, creating a 5.1 surround sound setup.

The range is composed of the Spektor 6 (pictured above second from right), a floorstanding loudspeaker, and the Spektor Vokal (right) centre channel speaker. There's also the Spektor 2 loudspeaker for front, side or rear channels, or the smaller Spektor 1 variety which is marketed as its bookshelf version. Both the Spektor 2 (second from left) and Spektor 1 (left) have been engineered for "enhanced bass".

The Spektor series is available in black ash and walnut surfaces, and while there's no word from Dali yet on availability or price, we'll be sure to update you when we've got it.