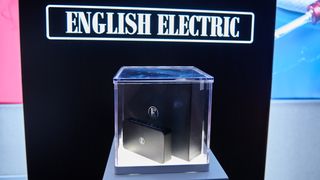 The Chord Company has relaunched a Great British brand to front its audio electronics business, English Electric, and has demoed its first product - a hi-fi grade network switch.

English Electric announced the device at the Bristol Hi-Fi Show with claims that the English Electric 8switch can act as a filter for streamed audio to remove unwanted noise which regular computer industry-made switches and routers never consider.

As the name suggests, the switch is an 8-port gigabit device which will likely retail for between £400-500 when it arrives later this year. The Chord Company MD, Alan Gibb said:

"Most streaming equipment comes from the computing industry without the same care and attention as hi-fi kit. In computing, it's all about getting your packets across from one place to another and if you can get  your email or word file, then you're fine."

The 8switch will come with its own unique power supply and feature better separation with the idea of "making nastier sounding tracks better".

English Electric was originally founded in 1918 in the armistice of the First World War by amalgamating five companies which had been used in the war effort to manufacture munitions, armaments and aeroplanes. It became defunct in 1968 after some notable successes including the English Electric trains and the supersonic English Electric Lightning jet.

More than purely the revival of a good name, though, its importance for the Chord Company is to be able to enter the audio electronics space without treading on the toes of the other Chord, Chord Electronics. The two British brands have an excellent relationship, according to Gibb, and it's as much to avoid confusion as anything else.

Expect to hear from English Electric later in the year.