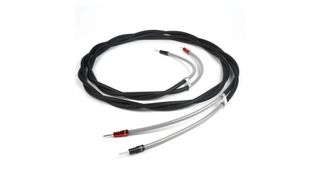 Chord Company has launched SignatureXL, the latest generation of the Chord speaker cable line that’s now in its fifteenth year.

Chord Company design engineers found it to be superior to the dielectric used in the previous Signature cable variant.

Naturally, Chord claims the SignatureXL brings notable performance upgrade over the previous generation - not only down to the dielectric XLPE but also the new ChordOhmic speaker plugs it is fitted with.

Chord says the new plugs, which make their debut in the SignatureXL and replace the more common gold-plated connectors, offer the conductivity and signal-preservation benefits of silver.

The Wiltshire-based company has been using silver plating in its high-end cables for many years, believing the higher conductivity results in lower resistance, less signal loss and a better audio performance from source to speakers.

Designed to complement Chord’s Signature Tuned ARAY and Super ARAY analogue and digital interconnects, the SignatureXL is available in red/black or all-black finishes and is priced £900 (for a 1.5m factory-terminated pair), with each extra metre an additional £300.

It will make its world premiere at London’s Festival of Sound in October.